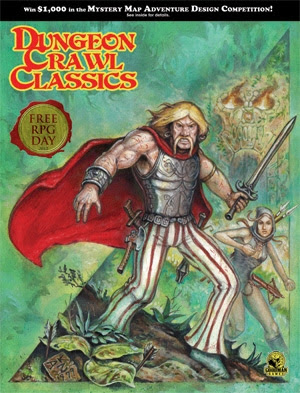 The DCC RPG Free RPG Day 2012 offering was written by Michael Curtis and Harley Stroh. Art was supplied by Doug Kovacs, Brad McDevitt, and Peter Mullen. It was published by Goodman Games.

Disclosure: This was the first year where I joined the Road Crew, and ran a game of Dungeon Crawl Classics at Dueling Grounds in Toronto. Consequently, I received both adventures before their publication in order to prep for the event.

The two adventures herein are as follows:

The Undulating Corruption, by Michael Curtis, is a 5th level adventure in which magical corruption can be removed...if you dare to take the risk! Although a linear scenario, this would be a great adventure for a convention game, or for inclusion in a home campaign. Because the goal is removal of corruption, this is a real "Quest For It" adventure that every Dungeon Crawl Classics judge should have available.

The second adventure is Harley Stroh's The Jeweler that Dealt in Stardust, which I once listed as the #2 must-have DCC adventure, right behind The Wizardarium of Calabraxis. This adventure is extremely creepy, and would feel right at home in a Robert E. Howard or Fritz Leiber story.

I discussed both adventures at some length at Raven Crowking's Nest. Both are reprinted as part of Chaos Rising.

This product also brought us the Mystery Map Adventure Design Competition, which was won by Jobe Bittman and resulted in the excellent The One Who Watches From Below.

Having written some well-received material for Purple Duck Games, I was tempted to enter this contest, but ultimately decided against it. For the curious, I was considering creating an adventure that took place inside the jeweled amulet pictured on the map. My idea was that the amulet was the prison of an immortal, and that by freeing the immortal, the PCs would change the history of the campaign world. Alternately, they could risk being trapped forever in the jewel in order to keep the immortal imprisoned. Or some could sacrifice themselves so that others could escape.

The reasons I decided against entering were twofold:

(1) The odds that someone would have a better idea were extremely high. Jobe Bittman proved that I was correct on that score.

(2) I already knew my idea, but if I somehow won, I would never discover the ideas submitted by anyone else. Imagine that by some fluke my idea was selected. A world without The One Who Watches From Below? What kind of monster would make something like that happen?

I would be curious what other people's ideas were for using the Mystery Map. I bet that there are dozens or more of submissions which would be worthy of an adventure in their own right! It is a real pity that Goodman Games hasn't put out a "runner up" booklet cataloguing these.