Shadow Out of Sapphire Lake 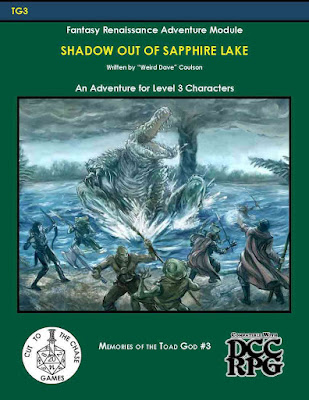 TG3: Shadow Out of Sapphire Lake is a 3rd level adventure written by “Weird Dave” Coulson with art by Matt Morrow (cover) and Johnathan L Bingham. Cartography is by Glynn Seal. The publisher is Cut to the Chase Games.

This is the fourth (and final) module in the Memories of the Toad God series. It continues a story-line related to Ibholtheg, the Toad God the series is named after. What relation Ibholtheg has with other DCC-related amphibious deities (such as Bobugbubilz, Schaphiroadaz, and Tsathoggua), is left to the judge to determine - but the background of The Croaking Fane might offer some ideas here.

This adventure was written for conversion to a number of different rulesets, which offers its own challenges. These are issues I have written about before, and boil down to three potential complaints:

(1) Statblocks at the end of the adventure, rather than where required within the adventure. Because different systems use different statblock sizes, this makes formatting a lot easier for the publisher, but makes the end product a little harder to use for the judge.

(2) Generic content. Dungeon Crawl Classics has a great aesthetic, where monsters and treasures tend to be unique. This is a lot harder to include if you know that whatever you write will have to be translated into multiple systems.

(3) Minor formatting glitches, such as using Constitution rather than Stamina.

Regarding the placement of statblocks, they are still at the end of this adventure. C'est la vie. In terms of generic creatures, Shadow Out of Sapphire Lake is the most Lovecraftian (or perhaps Clark Ashton Smithian) of the Cut to the Chase modules that I have written about thus far. There are plenty of unique creatures here, and nothing that strikes me as generic. In terms of minor formatting glitches, I am not aware of any.

In short, this is an example of how to do a multi-system adventure well.

So, having acknowledged that this adventure avoids the pitfalls of being written for more than one system, let's examine some of the positives:

Weird Dave’s Notebook: I love getting insights into other Game Master's thought processes. As such, I really appreciate these sidebars.

Adaptability: The adventure, like all Cut to the Chase adventures, provides notes about what you might need to change to fit the adventure to another setting. The adventure "tries to use as many generic location names as possible to make it easy to port to nearly any fantasy campaign setting", but is not so generic as to be boring. (Humanoids and demi-humans still suffer somewhat from standard D&D-type tropes, but this is not a large problem in this adventure.)

The PCs are movers and shakers: The opening setup of the adventure is written to allow the PCs to be new to the area or old hands, a cemented group or newly formed. Throughout this is a thread that the PCs are important to the locals, and may be able to "bask in some well-deserved hero worship". There is an explicit note that "The scenes in Kraden’s Hill are going to have the most impact if the players see themselves as taking the leadership positions that no one seems to be filling." It is always good to be reminded that, not only are the PCs agents for change in the world, but they are also looke up to by others.

The orcs are friendly: Not only are the orcs friendly, but there is now a reason they are "shadow orcs".

An Aztec-themed ancient race: Called the Xilonoc, they provide a reason to convert The Hidden Shrine of Tamoachan to Dungeon Crawl Classics, as well as use other Meso-American themed DCC content.

Strong CAS and HPL flavor: There is a lot of material in this adventure that may recall the work of H.P. Lovecraft and Clark Ashton Smith. These influences make it easy to include the Memories of the Toad God series in a Dungeon Crawl Classics game which makes use of the materials from Goodman Games.

Ibholtheg could use a patron write-up. If the publisher ever decides to make a compiled edition, I would strongly urge them to consider this as potential bonus material. Another possibility: An adventure written specifically for Dungeon Crawl Classics where a sorcerer is trying to reach out to the Squamous Toad, possibly from within Kraden's Hill. I have calculated that it takes an average of 4 adventures to reach 3rd level, and an average of three 3rd level adventures to reach 4th level. By this calculation, a 2nd or 3rd level adventure set between Tongues of the Screaming Toad and Shadow Out of Sapphire Lake would be perfect.

In a distant extraplanar prison, the outer power Ibholtheg thrashes and reels, sending tremors into the Prime Plane. Those tremors are causing a split to appear between the planes, and from that gulf Ibholtheg stretches its influence out, attempting to widen it. Shadows lengthen in the nearby frontier town of Kraden’s Hill, but is it too late to stop the return of the once-powerful Squamous Toad?