The Seven Deadly Skills of Sir Amoral the Misbegotten 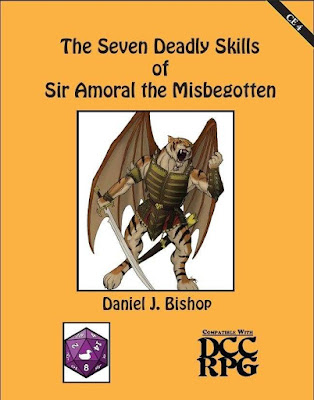 CE 4: The Seven Deadly Skills of Sir Amoral the Misbegotten was written by Daniel J. Bishop.
Cartography is by Tim Hartin of Paratime Design. Art is by Gary Dupuis and Michael Scotta. The publisher is Purple Duck Games.


Disclosure: I am the writer.

This was the fourth entry in the "Campaign Element" series, which is intended to provide material when a gaming session takes "a left turn at Albuquerque, leaving the poor Game Master wondering what to do next." The series is also designed to aid the dedicated judge deal with the "Quest For It" mantra of Dungeon Crawl Classics, as well as "patron quests, divine disapproval, and the requests of gods to pay back divine favor".

In particular, this Campaign Element focuses on providing warriors with something to quest for - the seven secret combat moves which Sir Amoral's ghost can teach.

The means exist within the adventuring area for PCs to gain information from oracular stone heads - in a game where the PCs need to "Quest For It" there is always a need for ways to get information needed to plan those quests. The best such devices have a cost, or trade-off, associated with them. In this case, there are a limited number of stone heads, and the user has reason to destroy them when used in order to protect his own secrets.

A number of creatures are supplied. There is an implied, but not developed, entrance to a dungeon - the Well of Despair. In addition, the product includes notes on “squeezing it dry”…effectively getting the maximum re-use from your investment.

The initial title of the product was intended as The Seven Deadly Sins of Sir Amoral the Bastard. That title did not get approval.

Six of the seven deadly skills are named after Appendix N authors. The skills themselves were an attempt to introduce something similar to the duel between the Dread Pirate Rogers/Wesley and Inigo Montoya from The Princess Bride.


The Stone Heads are real. Well, their powers are not, but they are based off a feature that is (or was) to be found in Dufferin Grove Park in Toronto.

In years long past, Gryffon Keep was a border fortification guarding a somewhat well-used roadway. In that day, the keep was placed in the trust of Sir Harold Amoral, one of the greatest warriors available to the then Lord Duke. Time has changed the land, and brought the keep low, and Sir Amoral has become little more than a figure of fable and children’s story. That the ruins in the forest were those of fabled Gryffon Keep have been forgotten by most, and the area is now known to locals as the Forest Ruin.

Although history has faded to legend, the ghost of Sir Amoral still haunts the ruined keep. During his lifetime, he sought to hoard his martial knowledge so that it might never be used against him by a mortal foe. Now, after death, he regrets this parsimony, and seeks above all to pass on his skills to those who are worthy.

The catch, of course, is that the ghost believes that only he can determine who is (or is not) worthy – and, of course, his methods for doing this are deadly.