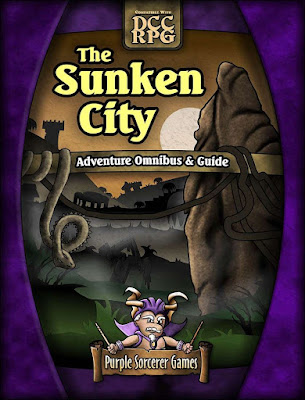 The Sunken City Adventure Omnibus and Guide was written by Jon Marr with additional writing by Jeffrey Tadlock. Art is by Jon Marr (including cover) and Benjamin Marr. The publisher is Purple Sorcerer Games.

This book collects Perils of the Sunken City, The Ooze Pits of Jonas Gralk, A Gathering of the Marked, and Lair of the Mist Men in one handy volume. These are sandwiched between a chapter introducing the material, and a chapter on Adventuring in the Sunken City.

The introductory chapter offers background information and thanks for the support that Purple Sorcerer has received over the years. Given the utility (ever increasing) of the Crawler's Companion and the Purple Sorcerer Free DCC Tools, it is really we who owe Jon Marr a great deal of thanks!

This chapter also offers Why The Sunken City?,
Handling The Funnel, and The Tao of TPK, which provide the rationale behind the Sunken City itself, and how it relates to funnel adventures in Dungeon Crawl Classics. These things are worth looking at for new judges and old hands alike.

It is the final chapter, however, where the Omnibus distinguishes itself from merely purchasing the adventures separately. Herein we find:

New Patron: Malloc: Written by Jeffrey Tadlock, this is a full write-up of the evil tree patron found in Perils of the Sunken City. Even better, the patron is included in the Purple Sorcerer Free DCC Tools, which means that your wizard or elf can generate a grimoire with all the necessary patron information!

Creatures of the Swamp: There are a number of new monsters which can be found in the Sunken City. These can help you develop your own adventures in the setting. A full class write-up for oppossumen characters is also provided!

Items of Eldritch Wonder: This section contains 22 magic items of dubious value to the PCs. For those playing at the table, though, they should provide some serious fun. Who doesn't want a lead chicken of occasional wisdom?

Demo and Con Tips: Jon Marr provides about half a page of tips. Some of these tips are universal; most relate to getting the biggest bang for your buck with the adventures included in The Sunken City Adventure Omnibus.