The House of the Red Doors 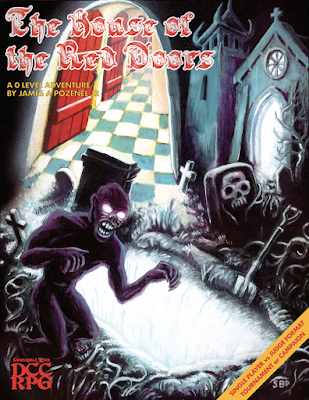 The House of the Red Doors is a 0 level funnel adventure by James A. Pozenel, Jr.. Art is by Stefan Poag (including cover), Doug Kovacs,
Del Teigeler, and Robert Cameron. The publisher is Horse Shark Games.

Disclosure: I was both a backer of the successful Kickstarter, and a playtester at Ragnarok Gaming Experience in Waterloo, Ontario. The author ran the game.

Dungeon Crawl Classics, as readers here know, is my go-to role-playing game. In some cases, though, you just don't have enough players to make a full party. I've blogged about dealing with this once characters have reached the exalted heights of 1st level, but how do you deal with a character's journey from gong farmer to adventurer?

The House of the Red Doors allows for a brief adventure in which a single player with a single character With a single 0-level character and only one player making decisions, this funnel can be run in 20-30 minutes per player, allowing a PC to rise to 1st level with an actual backstory. Because it can be played through so quickly, the judge is advised to be ready to jump into a follow-up adventure, or to place the newly-minted adventurer into a situation where adventure will occur! Of course, death is a real possibility here, and it might take more time and 0-level characters to exit The House of the Red Doors with a survivor.

The adventure can also be run as a unique sort of tournament, where each player plays through the funnel individually. The judge scores points based on the choices made and in-game events, and then declares the player with the most points the winner!

If you are a Road Crew judge looking for something to fit into a short time frame, using The House of the Red Doors as a short tournament will absolutely fit the bill. If you have only 1-2 players to get a campaign going, this adventure will also serve admirably. Finally, if you and your gaming friend have a 30-minute window for a break at work or school...well, you might get some converts in the lunch room!

Generations ago the House of the Red Doors visited your village. Now, so many years hence, could it be passing this way again? As the story goes, its mistress, Jassafae, still untouched by time’s ravages, is a powerful being of unknown origin. Through her, fates are altered and wishes granted, but only to those brave enough to cross her threshold. You toil unceasingly, suffer much, and to what end? Unrequited dreams and the hope of an early grave? You resolve to enter and change your destiny.

The House of the Red Doors is a challenging 0 level adventure for one player and one judge. Three rounds of puzzles with seven different endings await the brave souls that enter the movable mansionʼs threshold. A dreamland-like setting allows for ease of use in nearly any genre. This adventure can quickly create a 1st level adventurer for an ongoing campaign, test a playerʼs wits, or be run as a tournament.