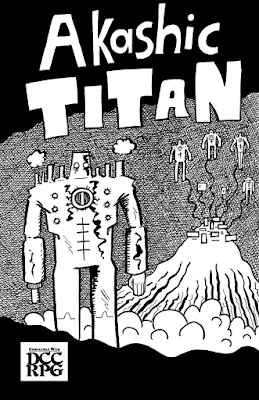 Disclaimer: I supported the successful Kickstarter for this product.

Imagine magical steampunk mecha. Now imagine that they are used for travel, not across a single world, but from world to world through a rainbow of Bands that extends beyond the colors we know (and may not even include them), and which may in fact be inimical to life as we know it. Now imagine that this travel occurs far enough below the radar that the discerning judge can use it to transplant characters from Punjar to Lankhmar to Drongo to the Fallen Empire to Transylvania. Now imagine that, among all the other influences listed, the author includes Italo Calvino and Miguel de Cervantes.

Is it any wonder that I am in love?

Part 1: Journey to Starnheim: This section lays out some hooks that the judge may use to get the PCs interested in Starnheim, and some of the places they might encounter on the way there. Basically, this sets a scene that may be replayed, with countless variations on an infinity of worlds. You hear of a magnificent market - but what you find just leads you on farther. The PCs might be imagining that finding the "market town" is the adventure, but this is just the prelude.

Part 2: The Town of Starnheim: Describes the hidden market town of Starnheim in general terms. It is entirely possible that the PCs discover Starheim early in their careers, as a place to sell excess loot or buy rare goods. There are factions for the PCs to clash with or become involved with. Eventually, the PCs learn about the "Other Side" and the mysterious Gateway leading there.

Part 3: Mount Starnheim: Unless the players have peeked, this is a moment where their world is going to be turned upside down. Literally and metaphorically. The PCs have now found the port where the Akashic Titans dock, and it is not at all the same as the place they have left behind. Not only that, but there is an implication that such places exist in all worlds.

Part 4: The Akashic Titans: If you are going to run a game with gigantic magical steampunk mecha, you will need rules for them. That is what this part supplies. Luckily, the writer realizes that this is not a one-player show, and when your akashic titan gets into combat everyone has things to do and ways to contribute.The rules are not at all convoluted, but there is serious chance of mishap (as there should be in Dungeon Crawl Classics. A sample titan is provided, but rules for statting up your own titans are fairly non-existent.

No one can tell you what is beyond the Jale Band. No information is given about passing from the Dolm Band away from the Ulfire Band back towards Blue. This is not really a problem. There are always things to worry about out there:

"Akashic titans are not alive, so it stands to reason that they could never be undead. Unfortunately, that is the best description of the akashic husk. Broken down akashic titans, usually with huge holes ripped in their hulls, their crews dead, yet their eyes still glowing, they are animated by some hideous force, and lurch their way through the Bands in search of functional akashic titans to destroy."

Part 6: The Elaborate Crystal Palace: This describes an interesting place in the Jale Band that the PCs are likely to come back to repeatedly. Chambers are randomly generated. There is more going on, and more for the PCs to get involved with, than this makes it sound like.

Appendix 1: Spells: Band Bubble is a 1st level wizard spell that "creates a mystical bubble that holds in oxygen and protects from the Bands’ toxic atmosphere and radiation." Don't leave home without it. Titan Bond is a 2nd level wizard spell that "enables the user to connect spiritually with an akashic titan, to feel what it is feeling, and to sense what is going on inside and out." Access Akashic Library is a 3rd level wizard spell that "enables the user to access the Akashic Library, a record of every sapient being’s every thought, word, and action." Compare with Walk the Akashic Record, a patron spell in The Revelation of Mulmo: Tentacled Edition and Angels, Daemons & Beings Between: Extended Otherworldly Edition.

Appendix 2: New Character Class: This describes the Akashic Pilot class. If travel through the Akashic Bands is the centerpiece of your campaign, this will make you a master of it. Of course, you will also be mutated.

Ellie O'Clock sits in her pilot's chair and gazes through the heavy glass, watching the aether of the Ulfire Band fizz and pop. Suddenly a nearby patch of void squirms, twists, and rips open, vomiting forth an obscene tentacled horror. A Stellar Squid! Ellie has no time to think--she grabs a lever, twists, and pulls. Instantaneously the metal behemoth she pilots reacts, swinging a giant metal fist . . .

The akashic titans are giant, magically-powered metal constructs that soar across the endless Bands in their journey from world to world. Akashic Titan gives you the tools you need to incorporate these magical behemoths into Dungeon Crawl Classics games. In addition to giving an overview of the akashic titans and the Bands, this zine provides two settings: Starnheim, a port city for the titans that can be dropped into any fantasy world, and the Elaborate Crystal Palace of the Jale Band.

Also included are new monsters (such as the Stellar Squid, the Stowaway, and the Living Constellation), spells, NPCs, the Akashic Pilot character class, and random tables.