The Sinister Sutures of the Sempstress 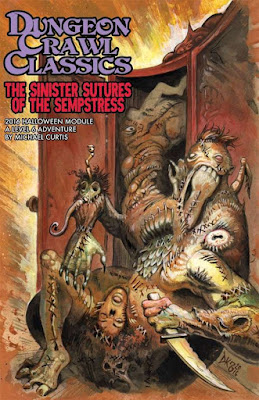 The Sinister Sutures of the Semptress was the 2016 Halloween Module. It is a level 6 adventure written by Michael Curtis. Art is by Doug Kovacs (including cover and cartography), William McAusland, and Stefan Poag. The publisher is Goodman Games.
I have to say it: I love this adventure!
There is a strong element of body horror here, and the players may see their characters changed by the Sempstress in the House of Tattered Remnants. Like all good Gothic horrors, the characters are out of their element, cut of from aid, and forced to face opponents/make decisions that they might regret. The idea of being forced to make decisions that permanently alter your character is not nearly so strong as in Bride of the Black Manse, but it is just as atmospheric (albeit in a different way).
As is also a common trope in Gothic horror, or the writing of authors such as H.P. Lovecraft, H. Rider Haggard, and Robert E. Howard (or, for that matter, with the aforementioned Bride of the Black Manse), the assault is not impersonal. In this case, it is the result of the PC's ancestors' actions:
"The PCs will face off against a terrible entity seeking her revenge on the PCs for a crime their ancestors committed long ago. This entity, known in lore as the Sempstress, dwells in a pocket dimension outside the ken of humanity and is capable of striking at her foes through mundane doors and furniture. The PCs will find no solace—even in their own home."
The wise judge, planning on using this adventure at some point, will begin to allude to these ancestors and their potential Sempstress-angering deeds as early as the funnel adventure! Doing so will not only give this adventure a deeper meaning, but it will help to create a sense of inevitability as the PCs' adventures continue.
Mother was wrong: There are monsters in the closet.
Terror seeks out the adventurers in the safety of their own homes, drawing them into a tailored web of vengeance long-deferred. Torn from their beds, the PCs find themselves trapped in the House of Tattered Remnants, the home and prison of an eldritch entity known only as the Sempstress. The adventurers must overcome patchwork horrors, unearthly craftsmen, and even the unraveling of their own realities if they hope to defeat the Sempstress in her lair and escape the House. Or will they be unmade by the Sempstress' evil?
This listing is for the original, digest-sized Halloween 2016 version of that adventure. For the more recent DCC Horror 02 version of the adventure, see this listing.

I am not aware of anywhere that the digest version is still for sale.
Posted by ravencrowking at 11:47