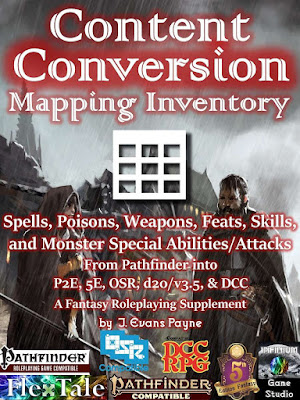 This product is an Excel sheet with tabs for Intro, Creature, Poisons, Weapons, Feats, Skills, Spells. It is intended to support the Content Conversion Guide by the same author and publisher. Presumably, the art credit is for the cover.

I have argued about the usefulness of this series of products here and here. Of the series, this is the least useful of the products for a Dungeon Crawl Classics judge. Only Creature, Poisons, and Weapons map to DCC.

The Creature tab contains listings for creature special abilities which are, in this author's opinion, are very poorly done. These do not make good use of the unique mechanics of DCC, and they do not reduce the verbosity of Pathfinder in any meaningful way.

In a Facebook thread, I took a closer look at a special ability of the Chaos Beast, as described in this series of products:

Claw - contact (curse); save Fortitude; effect amorphous body and 1 Intelligence damage per round; cure 3 consecutive saves. A creature cursed with an amorphous body becomes a spongy, shapeless mass. Unless the victim manages to control the effect (see below), its shape constantly melts, flows, writhes, and boils. An affected creature is unable to hold or use any item. Clothing, armor, helmets, and rings become useless. Large items worn or carried - armor, backpacks, even shirts - hamper more than help, reducing the victim's Agility score by 4. Speed is reduced to 10 feet or one-quarter normal, whichever is less. The victim gains the amorphous quality, but cannot cast spells or use magic items, and it attacks blindly, unable to distinguish friend from foe (dis+4 bonus on attack rolls and a 50% miss chance, regardless of the attack roll). A victim can temporarily regain its own shape by taking a standard action to attempt a Intelligence save (same DC as the initial save). A success reestablishes the creature's normal form for 1 minute. Spells that change the victim's shape (such as alter self, beast shape, elemental body, and polymorph) do not remove the curse, but hold the creature in a stable form (which might not be its own form, depending on the spell) and prevent additional Intelligence damage for the duration of the spell; shapechange and stoneskin have a similar effect. The victim takes 1 point of Intelligence damage from mental shock every round that it ends its turn in an amorphous shape - upon being drained to 1 Intelligence, further Intelligence drain ceases and the amorphous body effect is permanent until removed via magic (no further number of saving throws can cure the condition at this time). Ability score damage from this effect is restored after a long rest, or via restoration or more powerful healing magic.

What game is this person playing? My first draft rewrite, which took no more than 5 minutes to consider, write, and post, was

A creature touched by a Chaos Beast begins to lose form, expressed as 1d3 points of damage to a random ability score each round a DC 15 Fort save is failed. This damage heals at a rate of 1 point per turn (10 minutes) without contact, but the victim may still suffer corruption as a result.

Per 3 full points of ability damage taken, a DC 5 Will save must be made to avoid 1 minor corruption.

Per 5 full points of ability damage taken, a DC 10 Will save must be made to avoid 1 major corruption.

Per 10 full points of ability damage taken, a DC 15 Will save must be made to avoid 1 greater corruption.

These effects are cumulative, so that a character who has taken 6 points of ability score damage may suffer 2 minor and 1 major corruptions, depending upon the results of their saves.

Way more DCC. Altering an ability to something that works within the DCC rules is preferable (in my opinion, at least) to keeping an ability exactly the same and then layering condition rules into the game in order to make it work.

The Poisons and Weapons tabs have problems as well. "Con" is not an ability score in DCC. Clubs do 1d4, not 1d6 damage. This is, in effect, the Content Conversion Guide without the useful advice about Hit Dice, attack modifiers, or saves. This might be fantastically useful for people running Pathfinder or 5th Edition, but it is unlikely to help you convert Dungeon Crawl Classics adventures to those systems either. As such, for DCC judges, I cannot recommend it.

This Excel document is the optional companion to the Content Conversion Guide.

If you've ever wanted to take adventure content from one system and use it in another, this book has been designed to be of invaluable help.

For D/GM/judge/referees, for game designers, for indie RPG authors, or for someone looking to investigate the mechanics of other TIRPG rules systems, this book is designed to be a massive accelerant to the conversion process and a window into the "secret sauce" that has made lnfinium Game Studios products unique in their ability to be used across a wide variety of PC levels and difficulties.