The Tribe of Ogg and the Gift of Suss 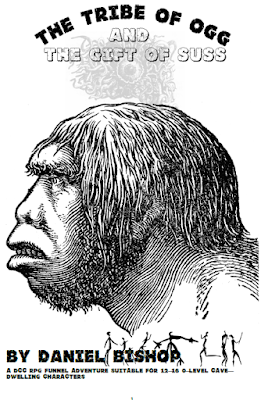 Disclaimer: I am the author. I also have an editing credit, and a Lead Developer credit.

Herein you will discover cavemen more primitive than those in Frozen in Time. There is a caveman occupation chart, which might be used with Mutant Crawl Classics if you want PCs who are more than huners and gatherers (see also here). There is a new race-class, the Ooloi, which are halfling-sized arboreal prehumans. There is a complete Mercurial Magic table for cave dwellers. The is a space princess. The ending allows you to send your cave dwellers anywhere you desire. And there is an encounter with Cthulhu.

There are some subtle links between this and Children of the Fallen Sun, by Stephen Newton. Bob Brinkman wrote an authorized sequel, The Tribe of Ogg and the Trials of Moss in the Sanctum Secorum Episode 41 Companion as well as publishing it as a Bonus Adventure for Free RPG Day in 2019. The adventure has been brought up on Spellburn and on the Sanctum Secorum podcast. You can find a review of the adventure here. Finally, if you pick up Danger in the Deep! you will gain patron statistics for Gul, the Old Darkness, one of the gods of prehistory described herein. This is still an adventure that I think deserves more play/coverage.

But, really, it's free. There is no reason not to grab it.

Suss, the Bright One, has sent a gift to the Tribe of Ogg – with a great screaming cry, a shard of the sun has splintered off and come hurling to the earth north of the Dread Forest. There it landed with a noise like many thunderbolts, making the earth shake like a horse shivering flies from its skin. For three days and three nights, there was a great light and a smoke. Then the bravest of the Tribe of Ogg came forth to determine just what Suss had sent. The characters are this party of brave cave-dwellers.