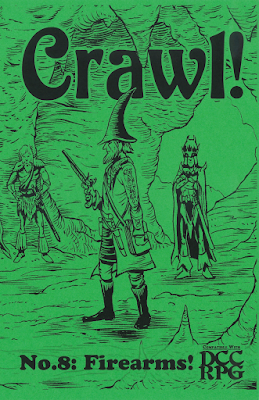 Crawl! fanzine #8 was written by Reverend Dak with additional writing by Mike Evans, Austin Schaefer, Christian Sturke, and S.A. Mathis. This issue, published by Straycouches Press, focuses on Firearms! Unusually, this issue is also available as Hack!, designed for the Swords & Wizardry (and therefore other OSR) rules. I do not own the Hack! version.


Actually, the Hack! version came about first, as Reverend Dak explains in the introduction, as the result of a Tenkar's Tavern post for Swords & Wizardry Appreciation Day. Either way, those of us playing Dungeon Crawl Classics certainly benefit as a result! If you get any singular firearms reference for DCC, this is the one to get.

So, what's in this issue?

Basic and optional rules for firearms. These are solid rules that help recreate the feel of using firearms in any campaign setting.

Different Eras of the Firearm

Mike Evans and Reverend Dak take you from the "Era of Powder and Smoke" to the "Era of Lasers and Rockets" with full stats for various weapons and ammunition.

An "adventure toolkit" that allows you to build an invasion of firearms users to bedevil your DCC PCs.