Crawling Under a Broken Moon #3 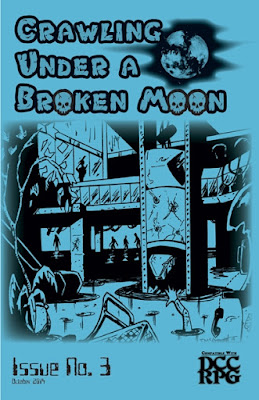 Crawling Under a Broken Moon #3 was written by Reid San Filippo and published by Shield of Faith Studios.

In this issue we get rules for generating 0 Level characters suitable for exploring Umerica. This is pretty basic stuff, but all appropriate for the setting, and most players and judges will find it very useful. Of extreme interest is the mention of the Robot race (and class), which links to the Robot class described on the Mystic Bull website. The old link has expired; the class can now be found here.

With local brigands coming to collect tribute, the 0-level PCs are sent into the ruins of a shopping mall to find it. I ran this adventure, and we had fun with it, but there was some dissatisfaction with the alternative XP rules used. They are designed to reinforce the intended action of the scenario, but my group was reluctant to accept them. Each judge should consider thier own group.

Otherwise, a lot of coolness, including the first mention of two patrons: Theszolokomodra and the Mighty Kizz, His Most Holy Rock ‘n’ Rolledness. The introduction of Kizz as a deity led to a cleric of Freddie Mercury in my home game.

This issue gives more details on creatures encountered in The Mall Maul: Malllocks, Pigtipedes, Trapdoor Toadspiders, and Vendibeasts. All of these creatures may be reused in further adventures.
Posted by ravencrowking at 06:52