Crawling Under a Broken Moon #5 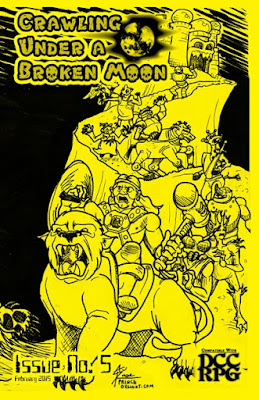 Crawling Under A Broken Moon #5 is written by Reid San Filippo and Sean Ellis. It is published by Shield of Faith Studios. This issue is dedicated to that "gonzo mishmash of fantasy and technology clashing together with imperfect harmony" that was the successor of Thundarr the Barbarian, He-Man and the Masters of the Universe!

This article is an overview of the Aetherian land by Sean Ellis. Although it is only a single page long, people interested in the inspirational cartoon will hardly need more.

Reid San Filippo and Sean Ellis provide a new character class which is appropriate for the setting. The class may use strange old technologies for its weapons and armor, and has an Honor Die to capture, as much as possible, the look and feel of the source material.

Forgotten Tech of the Un Men

"Long ago a rogue object flew between the Earth and the Moon, leaving chaos in its wake. Soon after, the Un Men appeared. A race of robotic warriors programmed with human consciousness, the Un Men seized what industrial resources remained in the northern Americas under a hail of blaster fire."

Sean Ellis and Reid San Filippo provide a description of the technology created by the robotic Un Men, including power swords.

Into the Dark Lands

"In the 22nd century, several objects struck this area from space, inciting volcanic activity and forming crater valleys and high ridges. The Dark Land is hazy with sulfuric clouds that obscure treacherous craters and bottomless pits."

The enemies of Aetheria dwell in this waste, which is replete with subterranean tunnels hiding ancient horrors. Here dwells Skull-Or, the warrior lich that is the main opponent of the Aetherian setting. By Sean Ellis and Reid San Filippo.

Castle Oldskull and the Masters of Aetheria

In this article, Reid San Filippo describes a magical, and intelligent, fortress that acts as a patron for non-magic characters. It also describes the Masters of Umerica, which anyone conversant with Masters of the Universe will find amusing at the very least. Statistics are not provided for these potent beings - every judge's Geek-O will be different!

This issue provides full statistics for the Serpentoids and the Un Men.
Posted by ravencrowking at 10:39