Crawling Under a Broken Moon #6 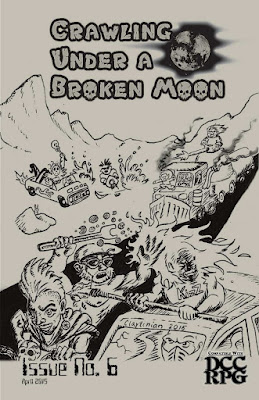 Crawling Under a Broken Moon #6 is written by Reid San Filippo, Chris Tamm, R. Dale Bailey Jr, and Sean Ellis. It is published by Shield of Faith Studios.

This is actually one of my favorite issues of the zine, which brings the full Mad Max experience to Umerica...but still being very much Dungeon Crawl Classics. So let's jump right in and see what we have.

"The wastelands are teeming with life and it all wants to rob, kill , and eat you, hopefully in that order. If you want to survive you need a good set of wheels, the ability to find what you need, and the will to do what it takes to stay alive."

Can your average Umerican PC drive a car? Ask your judge. If you absolutely must drive some sort of vehicle, though, this class is for you. This is a strong class, which uses mechanics reskinned from the Thief, Warrior, and Dwarf to create a specific set of skills. You also start with a vehicle...not a great vehicle, but a vehicle nonetheless.

Mayhem Behind the Wheel

Do you remember Car Wars? This was Steve Jackson Games' paean to the furious action of the original Mad Max movies and similar fare (like the Spy Hunter arcade game!). It was a bit fiddly, being more of a war game than a role-playing game, but it was fun. Here, you are given rules to drive around and kill things Umerica-style, with a little less fiddling and a lot more role-playing.

Rules are given for wipeouts, chases, ramming, and all the other goodness one would expect. "Popping the Hood" is a form of "Recovering the Body" for vehicles. Fuel consumption is abstracted in a way that works.

What’s Under the Hood?

In the post-Apocalyptic wastes of Umerica, not every vehicle is going to be the same. Therefore, rules are presented for creating new ones, by building off the basic statblocks of more familiar types of transportation. Vehicle quality levels and traits can make each vehicle different from others with a similar build. Most of the usable vehicles you encounter will surely be Beaters, but finding a rare Custom vehicle is like finding a magical artifact!

Of note is the "Possessed" trait, allowing a car to be "powered by an entrapped elemental or minor demon." Yes, you really can have a car that runs on blood or candy in Umerica. Or you might just decide to stat up Stephen King's Christine.

What it says on the tin: a quick and easy way to generate a random (but interesting!) road gang to menace your adventurers! After all, what is Mad Max without a Toecutter, a Humongous, or an Immortan Joe? What are those villains without a gang to back them up?

In the event that a gang of un-dead nuns (religious garb) driving armored delivery trucks, usiing flamethrowers (holy fire?) while out to recruit new followers isn't enough for you, the issue provides a link to another random road gang generator by Roy Snyder.

If you are not familiar with Elfmaids & Octopi, you should be - it's a blog with a lot of inspirational content. This list of random encounters and stuff is originally by Chris Tamm, and DCC’ified by Reid San Filippo. It is used by permission. Some of these ideas are color. Others you could design entire adventures around.

R. Dale Bailey Jr brings you the Petrol Zombie, un-dead that store gasoline in their guts. That's right - you don't want to firebomb them, and you do want to recover the fuel. Have fun with that. You might end up with petrol sickness if you aren't careful.

This sort of monster is not only perfect for the issue's theme, but it is also a strong recurrent monster. They are found in zombie herds, but it is pretty easy to imagine them hanging out near old gas stations, where you are going to need to go. They make your life more dangerous, but they aso have something you want. If you are willing to undergo a bit more risk, you can gain a larger benefit.

Overall, you just have to keep making choices, and that's what the game is all about.
Posted by ravencrowking at 07:58