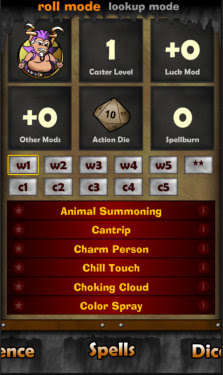 Most of the things I am discussing in the DCC Trove of Treasures are physical items that you can pick up and hold in your hand. Even in the case of pdf-only releases, you can print them at home to have a physical artifact. The Crawler’s Companion is different. The Crawler's Companion is software developed by Purple Sorcerer Games specifically for the Dungeon Crawl Classics role-playing game. The site describes it as "a free, funky dice-rolling, rules-referencing, chart-crushing Dungeon Crawl Classics RPG utility for the web, iOS and Android."

Purple Sorcerer has put together a set of tools that features:


In addition, there are a lot of automated generator scripts, including those for 0-level or higher level characters (with many options), spell book generation (with mercurial magic effects), demons, dragons, scrolls, swords, and unique monster traits.

If you are not previously familiar with the Crawler's Companion, but you have played any Dungeon Crawl Classics at a convention or an in-store event, you are probably already familiar with the character sheets produced by Purple Sorcerer: Four 0-levels to a sheet, or an easy-to-read higher level character. There is even an option for making tournament characters, for games like The Hypercube of Myt or Death by Nexus.

You could empty the dictionary looking for enough nice words to say about this product. Purple Sorcerer's Jon Marr deserves enormous thanks for creating and maintaining these amazing tools, and Goodman Games' Joseph Goodman deserves thanks for letting it exist. The Crawler's Companion stands, in my mind, as the best testament to the quality of the Dungeon Crawl Classics community.

As mentioned above, it is free. You can, of course, support Purple Sorcerer Games' tools directly (there is a link on their site), or by purchasing their adventures (all of which I have enjoyed reading and/or playing). I strongly encourage you to do so.

Get It Here.
Posted by ravencrowking at 06:52