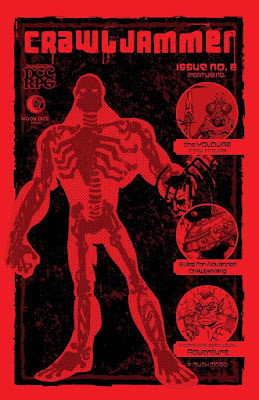 Fly people. From space. Tim Callahan manages to create a racial class that is both distinctive and flavorful. Probably the most distinctive ability is that a slain yolovar is replaced by a yolovar from another dimension that thinks its the original fly guy. The "matter conversion" power is also unique, without being overwhelming.

Advanced Crawljamming Through the Phlogiston Flux

We've had five issues to aclimatize us to the Crawljammer milieu. You knew that, sooner or later, advanced Crawljamming rules were going to show up. I like to imagine that these grew organically out of play at author Sean Ellis' table. Included in these rules are:

(1) Ship's Positions: Navigator, Helmsman, and Pitman. Each has a specific job that modifies how a Crawljamming ship works.

"While flying through the phlogiston flux, a Crawjammer navigator reaches out with his unconscious mind, striving to avoid obstacles and to choose the best course. There are times when those mental senses are faulty or an obstacle remains hidden. In these moments, a Random Space Encounter may occur."

Judges are provided with 20 such potential encounters, courtesy of Sean Ellis.

Pesky Pests of the Phlogiston Flux

Four new monsters of the spaceways are provided by Cory "DM Cojo" Gahsman. Phlogiston eels are lamprey-like monsters which feed on blood. Void mites consume the hulls of wooden ships. Rock terrors are armadillo-like creatures that propel themselves like small meteors until they find a likely meal. Eldritch leeches feed on magical energy to the bane of spellcasters everywhere.

What is the What? Five Random Tables!

Tim Callahan offers five tables to help you set up encounters on the fly. Male names, female names, sentient monster names, what monsters might be doing, and the potential contents of boxes PCs may choose to pry into are all covered.

Recruitment Day for the Perilous League

Finally, the issue ends with a 0-level funnel by Gilbert Isla. This marks the first published Crawljammer adventure that Tim Callahan didn't write. Importantly, it continues with the high caliber pulp science fantasy feel that the previous adventures excelled in.

Get It Here
Posted by ravencrowking at 11:32