Crawling Under a Broken Moon #13 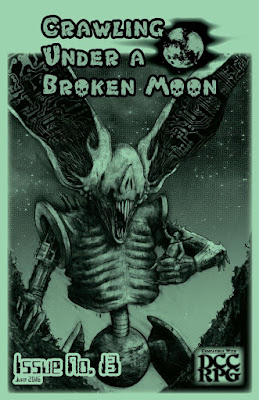 So, what's in this issue?

Author Diogo Nogueira provides a series of tables to help kickstart your creativity. The bones of a great post-Apocalyptic adventure are a few die rolls away.

For example, the adventure's goal to to find a technological artifact from the last age from a technology museum in a ruined city. But an intelligent liquid-metal being that can take any shape is tracking them, and a wandering mutant tribe may also become involved. A fatalistic cult seeking to spread chaos offers complications, but if the PCs succeed, they will have gained a crystal of power that came from the stars!

Flesh out the skeleton as you see fit.

This issue examines The Rail Tunnels of the Delphia Beast, by Reid San Filippo. In the ruined subway tunnels of old Philadelphia, your PCs are the prey. Includes tables for players prone to searching the surface ruins.

David VC, who created the Hologram and did a Racial Recast on Halflings in Issue #11, turns his considerable talent on recasting the Elf class as the "Gray". Yes, as in aliens. Included is the Gray Directorate, a patron-level entity. No actual patron write-up is included.

Described as an "homage to the A.I. killing machines of the original gamma irradiated future", author Ryan Moore gives rules for creating ancient machines that have survived to fight in the post-Apocalyptic future. Tables are provided to create unique Deathbots. An example is provided.

The dreaded Railipede is a technomagical infusion of giant centipede and subway train. Face at your own peril. The Luck Eater is an extradimensional demon that eats Luck. This last creature is usable in any flavor of Dungeon Crawl Classics gaming.
Posted by ravencrowking at 17:46