Crawling Under a Broken Moon #11 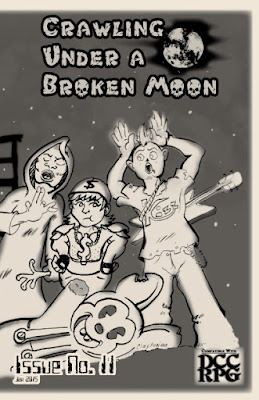 Crawling Under a Broken Moon #11 is written by Reid San Filippo, David VC, and Tim Bruns. It is published by Shield of Faith Studios. This is a jam-packed issue, with lots of cool stuff to play with, so we'll jump right in.

Tim Bruns and Reid San Filippo offer a "treatise on the faiths of Umerica and their clergy", including new rules for clerics that worship the various beings described. There is plenty of room for other deities in the wastelands...after all the God of the Pit from Issue #7 is not represented! Still, you get a lot in a small amount of space with this article.

Classica: "The goddess of Rhythm and Order, she binds all things together through music, rhythm, and focus."

S’aganoid: An entity whose "worshipers seek both knowledge, and the truth behind it." This is all types of knowledge, so they are sometimes very welcome, and sometimes shunned.

$ (Cash): "The impartial goddess of barter and wealth, her priests are often called upon to mediate in trade negotiations and disputes."

Grokk: The god of the twisted Wilds and the Wastes described under the Jack-O-rang-utan entry in Issue #10. His followers are, effectively, the druids of Umerica, who "seek to be one with nature and the universe, and view those who threaten their peace and serenity as dangerous radicals who must be stopped or destroyed."

Kizz: First mentioned in The Mall Maul in Issue #3, and then more fully described in Issue #4. "Kizz takes center stage as a god who both unites and divides the other gods. Some stories have Kizz and Classica fathering Technos Discos, but many of the god’s parentage is to be called into question when Kizz is involved. Kizz’s worshipers live life loudly and awesomely in their search to attain “Enlightened Awesomeness”."

Petrolex: "Fuel is love, fuel is life, fuel is freedom."

Nuka: "The Mother of Mutants" would just like to see a healthy glow on her followers' cheeks. Or radiating out from them. Or something like that.

Theszolokomodra: First encountered in The Mall Maul in Issue #3, and more fully described in Issue #4, "Theszolokomodra is usually a neutral god, but he has so many heads that many can manifest as lawful or chaotic, thus his worshipers can be of any alignment. Followers are entrusted to seek out knowledge and experience."

Elmos: "The Evil Puppet Master and corrupter of children, Elmo’s is a master manipulator, hiding evil intent behind a pleasant smile and a friendly demeanor". A masterpiece.

Silk: The Golden Lord of Lies.

Technos Discos: The chaos god of music was first mentioned in The Mall Maul in Issue #3. "His followers tend to be young, wandering souls who bring beats to places where there were none. Preferably to places where prohibited."

Yyaallaayy: "The outer dimensional lord of madness and creature of chaos. Few understand if only the mad seek to worship Yyaallaayy, or if those that seek to worship him go mad." Perhaps names from a battle cry in Thundarr the Barbarian?

You would think that bringing a whole new pantheon to light would be enough for a single issue, but you would be wrong. Author David VC brings an alternate take on the post-apocalyptic Halfling class as the "Feral Urchin". And it is good.

Depending upon alignment, a Feral Urchin may be a Wildchild (usually Chaotic), a Slinger (usually Neutral) or a Nerd (usually Lawful). Wildchildren invoke their Patron (Zendakk) to enter the Wild Rumpus, where they transform into small Beasts "with an assortment of features from various predators. The Beast’s fur/feathers/scales are often garishly hued." This is pure, and brilliant, Where the Wild Things Are. Slingers "are deadly shots" with any thrown or hurled weapon - think the feral boy in The Road Warrior. Finally, Nerds "are beloved of their Patron, a sentient algorithm named (Ur) K3L." Nerds are very good at repairing old tech or using computers.

But, of course, you cannot have feral children who refuse to grow up without invoking Peter Pan, and the Feral Urchin does so as well. This is about as close to perfect as one can get.

And yet there is still more! This article on post-Apocalyptic armor and new gear includes armor made from tires or scrap, protective sports gear, force field belts. Weapons include the necessary chainsaw and compound bow as well as the grill tank bomb and saw blade slinger.

There is a subsection on cheap (damaged) goods and quick fixes. This bit may be usable for Dungeon Crawl Classics of any flavor.

Okay, that has to be all this issue can hold, right? Wrong.

Next, David VC introduces a Hologram AI class that is part Star Trek: Voyager and part Tron, while fitting wholly into the Umerican landscape of Crawling Under a Broken Moon. As with the Feral Urchin, this is an excellent class.

The Scorpionoid is a centaur-like scorpion creature that is easily addicted to caffeinated soda pop, and are willing to fight as mercenaries. Preferred payments are fresh blood, raw sugar, or honey. Or perhaps that last can of Coke.

A quick table to use when a deity calls in a favor from a PC's cleric. This is most definitely usable at any Dungeon Crawl Classics game table that hasn't done away with clerics altogether.
Posted by ravencrowking at 12:23