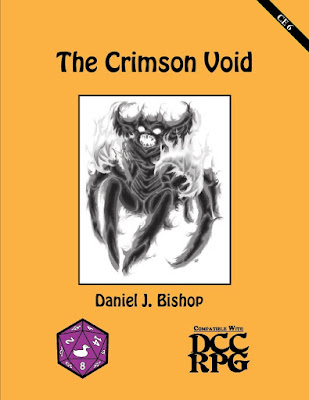 The Crimson Void is written by Daniel J. Bishop and published by Purple Duck Games. It is the 6th product in the Campaign Elements series.

The Campaign Elements series came about for one simple reason: Quest For It is the beating heart of the Dungeon Crawl Classics role-playing game. In order to seed information, and make those quests possible, I needed to have "drop in" content available. I reasoned that, if I needed this stuff, so would other people, so I commissioned Tim Hartin of Paratime Design to create 15 maps with five to ten numbered locations on them. I needed some advice as to what I should pay for those maps, so I spoke with Mark Gedak at Purple Duck Games. He kindly offered to pick the series up.

The product describes the goddess Kala Môr, Her cult, temple grounds, as well as the priests and other beings associated with the location. Included are the complete patron write-up for Kala Môr and the demi-patron write up for the Thing in the Crimson Void. At the time of its release, Kala Môr was the most detailed deity write-up for Dungeon Crawl Classics, with details on portfolio, holy symbol, clerical raiment, organizations, appearance, associations (both allies and foes), holy days, what is considered sacred or sinful, and omens.

Clerics are given specific treatment, including an actual list of "Spells of His God" that can be used to determine what spells the cleric knows. A focus on secrecy should offer interesting role-playing opportunities whether the PCs are friendly with, servants of, or even opposed to Kala Môr. I chose a Neutral deity so that there would be a maximum potential for all types of interaction. There is more than sufficient information to allow for PC clerics of Kala Môr.

The aforementioned Thing in the Crimson Void is Kala Môr's rival and nemesis, a Dweller trapped within by the vigilance of the temple. It can send demons into the world, though, and the judge is given Type I to V demons for the Void. Reason and means are given for the PCs to summon these demons, and there are potential consequences as well. Crimson Void wraiths and the Whisperer of the Void can create additional complications.

This location is not meant to be "fire and forget". It is intended as a persistent part of an ongoing campaign milieu. There is a section on "Squeezing it Dry" (as with all CE Series products) that gives the harried judge some ideas as to how the material can be used throughout years of adventure.

There is also a system for ranking supernatural Powers within a campaign milieu that can have actual effects in game play. "My god is stronger than yours!" may actually come up now in a spell duel, for instance.