Creeping Beauties of the Wood 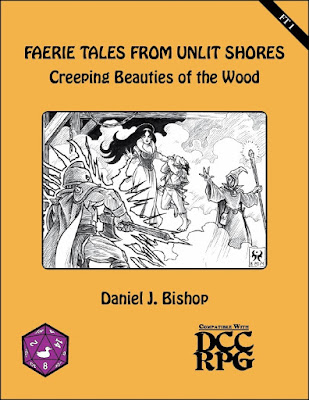 Creeping Beauties of the Wood is the second module in the Faerie Tales From Unlit Shore series, written by Daniel J. Bishop and published by Purple Duck Games.

This adventure follows Prince Charming, Reanimator, and gives the PCs the opportunity to deal with the loose ends from that adventure. In addition to the Sleeping Beauty, they are confronted by Prince Charming's two previous un-dead wives, Snow White and Cinder Ella.

The adventure is largely a hex crawl, but there are four important locations that break this up: the hiding places of the three un-dead wives, and the Goblin Market. During playtests, the Goblin Market was so alluring to my players that we easily spent the greater part of a game session interacting with it, and the players went out of their way to have their characters return.

The adventure includes two patrons: Doctor Chapman and Hizzzgrad, Daemonic Lord of Crawling Things. In the terms originating in Silent Nightfall and used in Angels, Daemons, and Beings Between: Expanded, Otherworldly Edition, Doctor Chapman would be a demi-patron. Hizzzgrad is given a full write-up, and is reprinted in the expanded edition of Angels, Daemons, and Beings Between. An effort is made to give the PCs reason to work with Doctor Chapman, and potentially choose him as a patron.

The adventure also includes a new race-class: Faerie Animals. These are, essentially, animals which can take human form and which may learn a bit of magic as they gain levels. The faerie animals described herein are suitable for the Grimmswood location; a table for the region around Portsmouth is provided for The Portsmouth Mermaid.

While this adventure makes use of traditional fairy tale motifs, it also makes reference to the works of Frank Baum, Lewis Carroll, and Christina Rossetti. There are Appendix N references worked into the text as well, although these are not as overt as in Prince Charming, Reanimator or The Portsmouth Mermaid. I hope they bring some joy to those who notice them.

Because the Faerie Tales From Unlit Shores series takes place in a persistent milieu - the events of one adventure have real effects on those that follow - your PCs may enter the Grimmswood many times over the course of their adventures. Even if, say, they fail to encounter Nick Cutter, the Iron Axeman, on their first outing, placing additional adventures in and around the region is certain to give them the opportunity to do so.