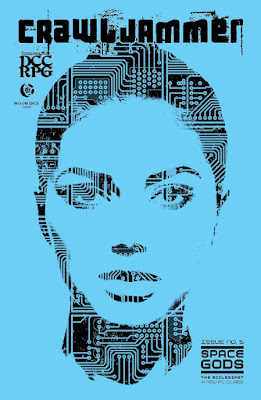 Crawljammer #5 is written by Tim Callahan and Sean Ellis, and published by Moon Dice Games. This issue focuses on the gods of the Crawljammer setting. Within, we find:

Welcome to the New Space Gods

Following up on his article about the Metaphysics of the Crawljammer setting in Issue #4, Tim Callahan now supplies a brief introduction to the new space gods, including their apotheosis from adventurers, and a note on the first and second generations of elder space gods.

This almost guarantees that the material will see use in play - if your PCs don't care about the God of Scientific Slaughter, their foes might! In addition, there is a class in this issue that makes use of the full patron format.

"Once the romantic partner of the thief Sperato, Sister Ultiva ascended to godhood over a thousand years ago after fulfilling a pact with both the god of light Hyperlux and the god of darkness Atronox. Some say she braved the depths of the Abyss itself to retrieve the Heart of the Forgotten Sun, while others say she foiled a potentially cataclysmic uprising of lizardmen alchemists on Jupiter who had attempted to overthrow the natural order of the universe. In her final days as a human, Sister Ultiva was cursed by the warlocks of Zeddix and turned into an abominable creature with four arms. As a goddess, she embraces her multi-armed form and seeks vengeance against those who betray their sworn duties."

As the excerpted bit shows, there is a fair amount of both flavor and useful information in the write-ups. A cleric dedicated to Sister Ultiva not only has some history to reference, but knows that the warlocks of Zeddix are her enemies, and that the lizardmen of Jupiter might take a disliking to those wearing her holy symbol. Her relationship to some of the other gods is made clear, as is the importance of sworn duties to her and her followers. There is plenty here to offer the prospective judge or a player hooks for role-playing.

"Known formerly as Sperato the delver, Sperato the shadow-hidden, and Sperato of the twenty-seven mysteries, this diminutive thief turned-diety was betrayed by his beloved Sister Ultiva on the steps of the Ossuary of Zeddix and left to die. But the plucky Sperato survived, nursed back to health over twelve long months by the troglodytic fungoids of the bone forest, and this mischievous former adventurer dedicated his remaining years to teaching the primitives of the misbegotten lands, where he developed a massive following of the unloved, the deformed, and the abandoned."

"Ten millennia ago, war was a straightforward matter: tribes would clash and the strongest survived. As war continued, complex technologies and strategies emerged as a deciding factor. Wars evolved to the point that they could be won from distant shores with unmanned craft and remotely-guided artifacts destroying an enemy that the victor would never actually face. This method of efficient slaughter is the love of Garun, the commander, the warrior king of ancient Mars. Though his pantheon may sound murderous, he also represents a desire to protect one’s own people from the weapons of the enemy."

Although his back story offers few hooks, this deity by Sean Ellis is very likely to see use in Crawljammer campaigns. I am reminded somewhat of The Sword of Rhiannon by Leigh Brackett, although I doubt that this was a direct influence. Needless to say, a truly warlike wizard or technomancer would do well with Garun as her patron.

"Of the Goddess in the Machine, it is said that Ars-Eleeta gained cosmic consciousness as man first rubbed sticks together to make fire. Others who have studied the divine texts more closely say that she was the one of the first technomancers to upgrade herself into almost complete cybernetic form when the divine spark of the universe was still fresh. Regardless of her true  origins, she acknowledges no morality: Ars-Eleeta’s mission is to always grow, improve, and innovate."

The combined work of Sean Ellis and Tim Callahan, Ars-Eleeta, along with Garun, truly demonstrates that Crawljammer is really a "science fantasy" (rather than a "fantasy in space") setting.

Although, as a writer, I predominantly comment on the words, I would also like to point out how artists Matt Hildebrand and Fred Dailey really capture almost a Jack Kirby-esque vibe with the illustrations...in particular, Hildebrand's illustration of Ars-Eleeta brings me back to a time when comics had a real "Wow!" factor.

It is interesting to compare the new space gods with the Umerican pantheon found in Crawling Under a Broken Moon Issue #11 and Buddy O'Burger in Issue #12. In the post-Apocalyptic milieu of Crawling Under a Broken Moon, the artifacts, myths, and celebrities of pre-Apocalyptic America have become gods. This is entirely appropriate to the setting. Who can forget, in Beneath the Planet of the Apes, how the mutated descendants of modern humans worshiped - and detonated! - an atomic bomb?

In the science fantasy environment of Crawljammer, the gods are mostly former adventurers who took the mantle of godhood upon themselves. In Crawling Under a Broken Moon, you might aspire to survive, or become a local warlord, but in Crawljammer you can aspire to become a god.

This isn't a criticism of either setting, or extolling either setting above the other. Rather, this shows that taking a different approach changes the way that the players and judge use the materials. You could compare these to the religions of Black Powder, Black Magic (where analogues of real religions are used) or the core Dungeon Crawl Classics rulebook (where most gods are remote beings which do not act as patrons to mortals). My own Kala Môr from The Crimson Void (and its classification scheme for various Deities and Powers) may offer yet another approach.

I think it isn't too much of a stretch to suggest that many games may benefit from examining multiple approaches, as would happen if a game was set in a Crawljammer milieu with Earth being the Umerica of Crawling Under a Broken Moon, for example, or the alternate history of Black Powder, Black Magic.

The Ecclesiast: A Divine Character Class

Wayne Snyder provides the art for the final article, another class by Tim Callahan. Space is vast, as has been mentioned, and humans are not the only creatures who worship strange gods. The ecclesiast is neither a cleric or a wizard, but something between which is a little of both without being all of either.

Unlike other classes, any race can become an ecclesiast. This last is probably necessary when faring among so many strange beings that are not automatically meant to be killed. This class is meant to be used with gods that are fully statted out as patrons - like the new space gods! - so its utility in other settings is limited to those gods that are either set up as patrons, or whom the judge feels like statting out.