Crawling Under a Broken Moon #12 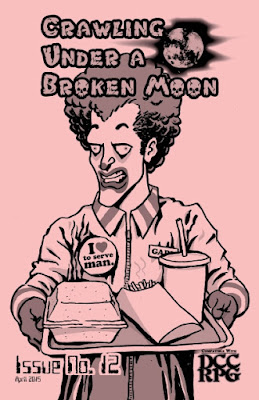 Crawling Under a Broken Moon #12 is written by Reid San Filippo and David Baity, and published by Shield of Faith Studios. This issue describes minor god and patron Buddy O'Burger, a fast-food mascot that became something more after the Apocalypse. Buddy O'Burger is a clown god of "feasting, customer service, and cannibalism".

What do you get in this issue? All the toppings, of course!

The Origin of Buddy O’Burger

The burger mascot before the fall of civilization, and how he became a god afterwards.

The Second Coming of O’Burger

A short account of the current cult, from an outsider's point of view, with a section on "Heretics and Food Critics"!

The in-depth information the judge will need to bring the burger cult to life.

Adventure hooks for the burger cult.

Have you ever wanted to be a clown? No, not dress as one. Become one. Have you? Now you can.

A full (and well crafted) patron write-up for the Burger God.

What is the Prize in that JollyMeal Box?

Cheap plastic toys that have some magical abilities. You can use them, but they break easily.

The Circus of Friends

What would a clown mascot of a burger franchise be without friends? Herein we find the Grumpus, Big Beef and the Burger Boys, the Fry Filcher, Nugg-a-saurus Rex, Doctor Dippinstein, and the Pie Guys.

The Delicious Artifacts of Doctor Dippinstein

Because you need magical items with a Buddy O'Burger theme.

This issue introduces the gentle reader to the Clownugs (Buddy O'Burger's enforcers), the  Clownauts (bigger versions of the same), and the Fryder (big spiders made of french fries).

An article on how to create lesser mascot gods, complete with Tast-E-Cone as an example.