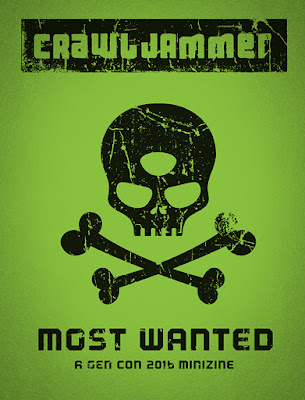 Not everything in this blog needs to be specifically approved for use with Dungeon Crawl Classics. Well made fan content and free extras are listed, too. In this case, Crawljammer: Most Wanted is a Gen Con minizine written by Tim Callahan, illustrated by Fred Dailey, and designed by Matt Hildebrand. 100 signed and numbered copies were produced for distribution at Gen Con 2016.

When these guys say "minizine", they're not kidding. The product is 1/4 the size of a normal letter-sized piece of paper, and includes six pages plus front and back cover. The page numbers are faces on a six-sided die, so roll 1d6 and see which of these villains might intersect your PCs' path.

Included are complete stats and cool illustrations for:

* The Psi-Klopian: A one-eyed assassin with enhanced psionics.

* Dio-Skurr: The "Binary Man", a riftrunner who had become trapped between dimensions of fire and darkness.

* Merelda: The genius technomancer who styles herself "Empress of the Machine".

* Hel-Zarren: Fiend of the Rage Pit from the Gamma Nebulon dimension.

* Shrike: The Star Hunter who seeks agents of the Perilous League for his prey.

These villains each offer a different flavor of encounter. They remind me, in many ways, of the early New Gods, Silver Surfer, or Green Lantern comics.
Posted by ravencrowking at 05:10