Crawling Under a Broken Moon #7 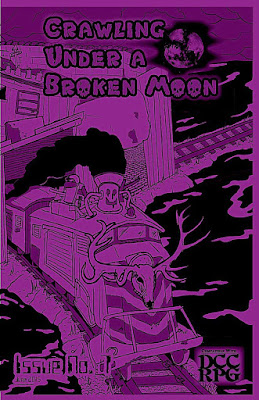 Crawling Under a Broken Moon #7 was written by Reid San Filippo, Sean Ellis, and Daniel J. Bishop, and published by Shield of Faith Studios. Disclaimer: I wrote a creature that appears in this issue's Twisted Menagerie.

When Issue #5 focused on the Kingdom of Aetheria with its Masters of the Universe vibe, I had worried a little that Crawling Under a Broken Moon was beginning to run out of steam. How ill-founded those fears were! The post-Apocalyptic genre is as fertile a playground as the typical run of fantasy gaming, and, rather than taking a departure from its focus on post-Apocalyptic play, Shield of Faith Studios continues to examine the numerous possible facets gaming after the End of the World can take.

Issue #7 is a bit more of a hodge-podge than the rather more tightly focused issues that preceded it. It is hard not to get the impression that some of this material simply could not be fit into previous themed issues. This is not a complaint; there is some really good stuff here.

In this issue we get:

A lot of games have tried to deal with the concept of cybernetic PCs, with varying degrees of success. I think that the authors here nailed it, providing a meaty class that fits well with the Dungeon Crawl Classics and the Crawling Under a Broken Moon vibe. You could use this class with Nowhere City Nights to get a Judge Dredd-style game.

In The Road Warrior, Mad Max encounters a gyrocopter pilot. Now you can, too. Or you can become one.

Rules are provided to cover the operation of trains, gyrocopters and ultralights, and mechs (and similar robotic vehicles). Appropriate wipeout tables are provided. How the new vehicles work with the Petrol Head class (and others!) is also described, for each vehicle type.

If you are playing in the Brimstone of Black Powder, Black Magic, you may find the rules for trains rather useful.

This issue focuses on the Citadel of Scrap, a "major city in the wastes devoted to technology, transportation, and trade", and also a convenient hub for adventure hooks in the Umerican wastelands. Written by Sean Ellis and Reid San Filippo, the article covers history, layout, job opportunities, and a new monster, the Scut, once-humans drained by the God in the Pit to become "little more than dry sponges in search of humanity to absorb".

The God of the Pit, you ask? Well, "within the last decade a great meteor crash decimated the part of the city known as the Ruins. It is believed that a god-like being slumbers at the bottom of this crater, gaining strength until he may awaken and eat his enemies and all they love."

An additional "interesting place to die", the Rail Wastes are the wastelands where rail lines are still operating (at times) between the Citadel of Scrap and whatever destinations it is still in contact with. The focus is on adventure, and things that may happen to make your journey by rail more interesting.

Sean Ellis provides a brief rundown on what now works as coinage in post-Apocalyptic Umerica, from pretty bits of bead to promissory notes for gas, or even water purification pills. Now, do you spend your treasure, or do you use it?

Remember how last issue made me think of statting up Stephen King's Christine? In this issue, the Autogiest has done the work for me. It is exactly what it sounds like: a possessed vehicle that wants to kill you.

The Bounder is a mutant descendant of the kangaroo, loosely inspired by the hoppers of Sterling Lanier's The Unforsaken Hiero. Of course, being Umerican, they have some special powers that hoppers certainly do not. This is the creature I wrote for this issue.

Cybernetic attachments that are no longer wanted, the Discarded "are driven by a hate the people that rejected them and a desire to continue their existence by seeking out new implants to incorporate." If you are a Doctor Who fan, as I am, you will be reminded of the bits of Cybermen around the Pandorica. Star Trek fans may think of Borg implants that infect new hosts. Either way, this is a potentially horrifying monster, and one that, with its relationship to Cyborg characters, brings the issue to a satisfying close.
Posted by ravencrowking at 11:28