Crawling Under a Broken Moon #1 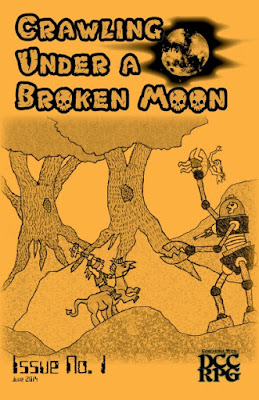 Crawling Under a Broken Moon #1, is by Reid “Reidzilla” San Filippo and is published by Shield of Faith Studios. I am not 100% certain off the top of my head, but I believe that this was the first "setting zine" for Dungeon Crawl Classics, to be followed by Crawljammer, Metal Gods of Ur-Had, and Black Powder, Black Magic. I imagine that if I am wrong, someone will correct me in the comments.

Crawling Under a Broken Moon does not begin with a 0-level primer. It jumps right into the action. This could be a problem for some judges, but there is no reason to not simply use this material with Dungeon Crawl Classics as it stands.

I would like to also point out that this issue is really a work of love coming from a single source. Apart from editing by Jason Bossert, Reid did it all - cover art, interior art, and writing. That understated cover carries all of the energy and enthusiasm of the early Judges' Guild materials, and is a good example of how individuals can open up whole new vistas with Dungeon Crawl Classics. And then share those vistas with the rest of us!

Running adventures in a "Gonzo Post-Apocalyptic Fantasy World" takes a slight bit of adjustment. Table DDD: Found Item Condition Table is of particular use. This might even be something that a cunning judge could borrow for other Dungeon Crawl Classics settings....even the most standard settings might have a windmill or a windlass that has seen better days.

The main setting for Crawling Under a Broken Moon is Umerica, a post-Apocalyptic version of the United States which allows for a wide range of adventures. Clearly, inspirations included cartoons like Thundarr the Barbarian, as well as earlier games such as the original Gamma World. It would be pretty easy to place adventures in the ruins of any continent or nation if you so choose.

Obviously, guns are going to be considered important to the survivors of this twisted landscape, and Reid San Filippo provides an excellent set of rules summarized from articles by Reverend Dak and Mike Evans in Crawl! fanzine #8, used with permission.

The Sharkhana are the descendants of shock troopers bred by aliens from sharks. They might trade if they are not hungry. They are usually hungry.

Debris elementals are exactly what they sound like - elemental creatures created from the debris that litters the Umerican ruins. Although it does not appear in the description, I like the idea of a debris elemental that contains a vital bit of technology in its swirling mass of junk. The PCs would need to extract the goods, even if they failed to kill the monster.

The sentrybot is a souped-up version of the security robots that are already being tested out in real life. They follow a strict program, and do not kill. Unless they are programmed to kill. Then all bets are off.

The lobstrosity is an alien crustacean that seems to mix inspiration from Stephen King's Dark Tower series, H.P. Lovecraft's Mig-Go, and the garbugs of the 1st Edition Advanced Dungeons & Dragons Fiend Folio.

The issue is rounded off with a description of Blooms Fashions, "a store with clothes to die for". If you are a fan of Doctor Who or Kolchak the Night Stalker, you should be able to add some fun details to this area, or expand it into an entire adventure!

Foretold in the ancient calendars, early in the 21st century a rogue object from deep space hurtled between the Earth and the Moon. Its passage caused catastrophic destruction around the globe, ripping the very fabric of time and space itself; yet mankind still survived. Centuries later, the planet is reborn… a strange new place of alien wonder and death: a world ruled by savagery, cruel sorcery, and twisted science. Now is the time for the mighty to rise up and take their place in this perilous and untamed land. Will they bring justice or suffering? Only time will tell...
Posted by ravencrowking at 17:03