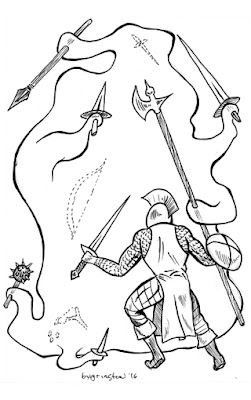 Appendix M is a blog by writer and artist Jon Wilson, whom some may know better as bygrinstow.

DISCLOSURE: Jon Wilson did the illustrations for the free version of The Thing in the Chimney, the original Dungeon Crawl Classics holiday adventure. A creature from this blog was used (with permission) in Garett Oliver's The Snow Queen in D.A.M.N. #1.

When I first started this blog, I intended to include only products that were available either physically or in pdf format. Then, thanks to the Purple Sorcerer online tools, I decided that I should also include relevant electronic applications. However, this blog contains such a plethora of interesting Dungeon Crawl Classics creatures and NPC encounters that I decided it would be remiss not to include it. If you are trying to assemble a "DCC Monster Manual" for your home game, perusing Appendix M makes a good start.

Described as "A Confabulation of Unique Monsters for The Dungeon Crawl Classics RPG (DCC RPG) and Suitable for Other Sword & Sorcery Role Playing Games, Including Those of The Old School Renaissance (OSR)", Appendix M has been around since 2012. It contains such useful entries as the false (and true) dryad, which might be encountered as a follow-up to The Portal Under the Stars; the wizard known as Tahn-Ru the Trapmaster; the Doctor Who inspired Husks of Josiah, and even a Murder Hobo PC class.

The creations available here span the gamut of Dungeon Crawl Classics milieus - there are beings at home in Umerica, in the phlogiston flux between planets, on the Purple Planet, or in a local dungeon or foreboding wood.

Note: Gentle Reader, as I am now including select blogs in the DCC Trove of Treasures, please let me know of any blogs that you may feel are appropriate for inclusion!