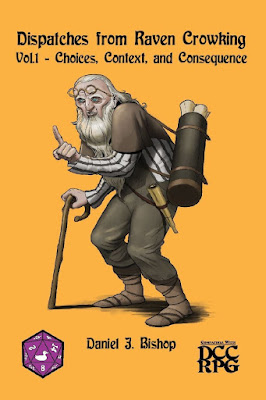 Disclosure: I am the writer. That is not actually a picture of me on the cover. Really.

As the name implies, Dispatches has its genesis in my blog, Raven Crowking’s Nest. Dispatches has a few advantages over the free blog versions of the same material. First off, the material has been re-edited, cleaned up, and in some cases expanded. Secondly, and perhaps most importantly, it is in print so that you can keep it on your gaming shelf. Finally, Dispatches will contain some new material as well…a “thank you” for your continued interest!

The genesis of Dispatches is relatively simple: Mark Gedak of Purple Duck Games thought of it, and asked me if I was willing to do it. And I said "Sure". It is important to note that the free versions of any material reworked for Dispatches is still available on the blog.

Introduction: A simple introduction, from which I extracted the above paragraph ("As the name implies...").

Choices, Context, and Consequences: This article encapsulates what is probably the most important bit of gaming advice I know. It deals with the interplay of player choice; context provided by the system, the setting, and the judge; and the consequences of player choice, which in turn create a new context for new choices.

Prepare for the Epic Endgame!: Great adventures are about great stories, right? Well great campaigns are about great stories, too, and that epic finale should be telegraphed from the beginning. There are two things to keep in mind: that epic endgame is the character's endgame, not the campaign milieu's (usually), and that there should be at least three possible endgames presented to allow the players choice.

Reading Appendix N: A series I started for my blog, which is more-or-less made redundant by the appearance of the excellent Sanctum Sanctorum podcast. In this case, I look at Edgar Rice Burroughs' The Efficiency Expert and Sterling E. Lanier's Hiero's Journey.

Shanthopal: Background to the Golden City: My own urban milieu-in-progress.

Using Patrons in the Dungeon Crawl Classics Role-Playing Game: A slightly modified version of the article that appears on my blog and in Angels, Daemons, and Beings Between.

Devising Initial Adventures for Dungeon Crawl Classics: Escape from the Shrouded Fen, by Terry Olson, is, to my knowledge, the first funnel adventure to fully embrace the recommendations herein.

Learning Spells on the Fly, or, The Slippery Slope of Arcane Doom: By the book, Dungeon Crawl Classics wizards need at least one week per spell level to learn a new spell. But what if they don't have the time? What if they want to try to learn that spell right now?

Get It Here.
Posted by ravencrowking at 10:57