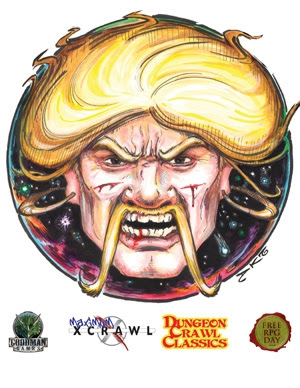 The DCC/Xcrawl Free RPG Day 2014 offering was written by Terry Olson and Brendan J. LaSalle. It contains art by Doug Kovacs, Stefan Poag, and Jesse Mohn. It was published by Goodman Games. As with the previous year's offering, this product contains one Dungeon Crawl Classics adventure and one Maximum Xcrawl adventure using the Pathfinder rules.

The Dungeon Crawl Classics adventure is Elzemon and the Blood-Drinking Box, by Terry Olson. This is a 1st level adventure, which sees a group of PCs infiltrate a rather disgusting wizard's sanctum to steal the titular blood-drinking box.

I ran this adventure twice: once at Dueling Grounds on Free Role-Playing Game Day, and once at home in preparation for the public run. There is a seemingly-endless stairway in the adventure, which spirals downward for a very long time. This is a spiral stairway, with an open shaft in the middle, far too wide to see the opposite side.

In my home prep game, each of the players was controlling more than one PC. So disconcerting was the stairway that one player had a character leap off the stairs in the vain hope that I would tell the players what happened to him. Few players these days carry the necessary supplies - even the torches or lantern oil! - for a two-day hike down an incredibly long stairwell. Fewer still carry the supplies to second-guess themselves, and hike back up more than once. Although this isn't a "trap" in the classical sense, in actual play it functions as one.

(Why any player who is at all familiar with my judging style thought that would work is a whole 'nother issue.)

Most great adventures include some decision-making that cannot be resolved simply by rolling dice. Elzemon and the Blood-Drinking Box is no different in this regard. There are at least two decisions the party must make that will probably require some discussion: Now that we have this box, who is going to feed it? And what are we going to do with it? The answers to both questions have enough potential repercussions that players shouldn't rely on snap judgments.

As a point of interest, "Elzemon the Forgotten" is the quasit in The Infernal Crucible of Sezrekan the Mad, by Harley Stroh, which is featured in both the Dungeon Crawl Classics core rulebook (1st to 3rd printing) and the DCC RPG Free Role-Playing Day Adventure Starter from 2011. Is this the same quasit? Are all quasits named Elzemon? Or is "Elzemon" the infernal equivalent of "John Smith"?

Elzemon and the Blood-Drinking Box is reprinted in Chaos Rising, which also reprints The Infernal Crucible of Sezrekan the Mad.

You can also hear Terry Olson discuss the adventure on Spellburn.

Dungeon Detonation! is the Maximum Xcrawl adventure, written by Brendan J. LaSalle. As with the DCC RPG/Xcrawl Free RPG Day 2013 offering, this is a Pathfinder adventure, and will get no in-depth coverage. There are already three converted Xcrawl adventures available for Dungeon Crawl Classics, and a DCC version of Xcrawl is in the works. Afficianados of the Dungeon Crawl Classics game will know Brendan LaSalle from The Hole in the Sky, as well as (possibly, if you are lucky) his judging at many conventions.

At the time of this writing, he featured on the most recent Spellburn podcast, where his newest DCC adventure, Neon Knights, is mentioned.