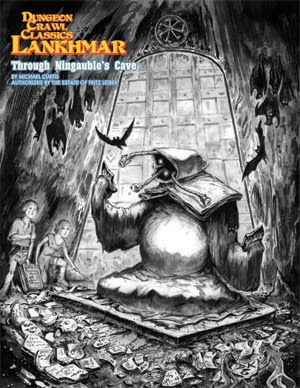 DCC Lankhmar: Through Ningauble's Cave was written by Michael Curtis. Art is by Doug Kovacs. This product was published by Goodman Games and authorized by the estate of Fritz Leiber.

This supplement describes Ninguable of the Seven Eyes and the endless caverns in which he lives. Here you will find the means to transport your PCs from any Dungeon Crawl Classics milieu to Nehwon, and vice versa...travelers to Nehwon from other realms are not unknown in the stories of Fritz Leiber.

Michael Curtis offers a table of wanderers who might be encountered in the cave, a description of the known points where the caves emerge, and the known landmarks of the Bottomless Caves. Doug Kovacs provides geomorphs that ensure no two trips through Ningauble's domicile will be the same. When describing the entrances and egresses where the cave may emerge, Michael Curtis offers a sort of whirlwind tour of Nehwon, including adventure ideas and sample encounters.

A bibliography of relevant stories is also provided. This is a nice touch, helping the judge review the setting (and its occupant) through Fritz Leiber's own words.

Finally, Ningauble is described as a patron, including all relevant information except that relating to spells.

Altogether a worthy introduction to DCC Lankhmar, which serves to whet the appetite for that which is to come!