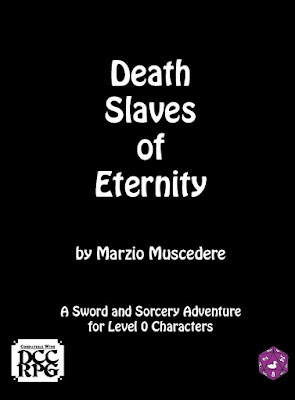 Death Slaves of Eternity was written by Marzio Muscedere. Art is by Luigi Castellani, Matt Morrow, and Brett Neufeld. Cartography is by Kristen Richards. This product was published by Purple Duck Games.

Disclosure: I saw, and had an opportunity to comment, on this product before it was released. I have had the opportunity to sling dice with the author now on two occasions, and on one of those two, he bought me beer.

So here's what we have. Death Slaves of Eternity is a 0-level funnel that describes itself as "A Sword and Sorcery Adventure". That description is accurate. In addition to the adventure proper, you get a new 0-level occupation table, a complete new patron, and conversions to turn the Dungeon Crawl Classics demi-humans into classes for a humans-only game.

This is, perhaps, the most ambitious funnel to date. And it very much meets its goals.

Here's what it does right:


I had a tee shirt made that describes Dungeon Crawl Classics as "The game where you fight unknown monsters, speak with alien gods, and find ancient magicks.......and then you reach level 1." Well, this adventure definitely lives up to that description.

Here's what it does wrong:

Which is not to say that it is the "perfect" or "ultimate" DCC funnel. I don't believe that such a thing is possible. Every author throws new things into the mix with everything they write. But it is to say that it is good. Deeply good. "I would have been proud to have written this" good.

The author writes, in his introduction, "This adventure is inspired by the vast works of Robert E. Howard and Clark Ashton Smith," and this definitely shows. In fact, there are several nods that aficionados of these authors will not fail to notice. None of them gets in the way, and it doesn't matter if your players don't notice.

It should be noted that the patron, Mog'Malu, would be appropriate for use with the goat-headed being from The Portal Beyond the Stars.

It is said even the boldest of heroes cower when madness sits the throne, and in the perilous and lurid city-state of Hazruun the Vile - its sultan is indeed mad. For when the body of his only son and heir is found purple and lifeless, strangled in a back alley drinking den - it is decreed all must pay for the crime.

Condemned for a murder you did not commit; entombed alive with the corpse of a slain prince; you are trapped in a world of blackness, with no days, no nights, no seasons, only endless existence and the maddening sound of your own screams.

But there are worse things to fear in the tomb than the dead. For deep below in the forlorn and time-forgotten halls, shadows stir, ancients speak, and things have learned to walk that ought to crawl – and lost to the ravages of dread antiquity lurks a being who’s only thought, since the beginning of time, is its ravenous desire – to feed!

Are you able to plumb the hidden mysteries of the grave, unlock its dreaded secrets and abominable lore? Do you possess the strength and courage to battle your way back into the light? Or are you doomed to spend the remainder of your pitiful lives as death-slaves of eternity…

I, for one, hope to see more of the "lurid city-state of Hazruun the Vile".

Get It Here!
Posted by ravencrowking at 12:47