Cult of the Skin Demon 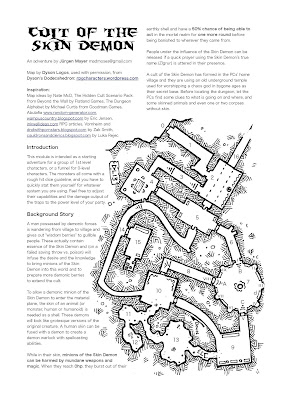 Cult of the Skin Demon is written by Jürgen Mayer, with cartography by Dyson Logos. No publisher name is given.

Although intended as a "starting adventure for a group of 1st level characters, or a funnel for 0-level
characters" the author doesn't provide more than the Hit Dice of creatures, which are rough guidelines indeed. This may make it easier to tweak the adventure for some, and harder for others. Damage is supplied for traps, athough saving throws are give in TSR-era Dungeons & Dragons format rather than Dungeon Crawl Classics format (i.e., vs. breath weapon, vs. poison, etc.). This shouldn't prove too difficult for most DCC judges, and opens the scenario up for other games, such as Labyrinth Lord and OSRIC.

In this sense, Cult of the Skin Demon is not really a Dungeon Crawl Classics adventure per se. It is, however, free, and it does not require much effort to move from its "system neutral" roots to full DCC. The author lists inspiration from a variety of sources including (but not anywhere near limited to) The Dungeon Alphabet by Michael Curtis, and, although the Dungeon Crawl Classics rulebook is not listed in the inspirations, I would be surprised if some of the design aesthetic of the scenario wasn't inspired from there. I would not be surprised to learn that the copious appendixes of the 1st Edition Dungeon Master's Guide by Gary Gygax was also referenced.

A cult of the Skin Demon has formed in the PCs' home village and they are using an old underground temple used for worshiping a chaos god in bygone ages as their secret base.