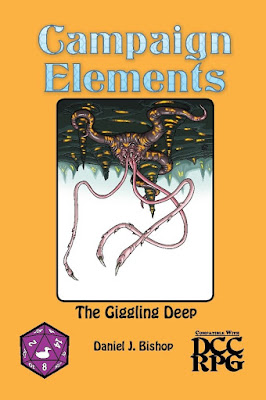 CE 7: The Giggling Deep was written by Daniel J. Bishop as an environment for 4-6 PCs of level 4 or above. Art is by Jacob Blackmon. Cartography is by Tim Hartin. The publisher is Purple Duck Games.

You can blame three things for the imagery in this Campaign Element. First off, over a decade ago I was in Ontario's Warsaw Caves area when I saw my first ebony jewelwings. Second off, James Raggi's Random Esoteric Creature Generator offered a few ideas. Finally, the BBC made a documentary called Life That Glows with David Attenborough.

Those of you who have read the product will understand how the first and last items influenced the design. From the Random Esoteric Creature Generator I got the base ideas for several creatures, including the turtle theme and the Goremera as a creature made of blood.

As always with the CE Series, the map was drawn by Tim Hartin first, and then I tried to determine how to best use it. In this case, I decided to include a massive hoard worthy of theft through subtlety or violence, an expansion of the Hidden Lord from the core rulebook, random fungal forest tables, a potential long-term enemy (or two), and the Giggling Dark for which the Deep itself is named.

The Giggling Dark is a source of information, including spell information, or to re-roll Mercurial Magic results. There is, of course, a substantial risk involved.

For those who are interested, The Giggling Deep started as The Screaming Void. But, since I used Void for CE 6: The Crimson Void, I wanted something different. Microsoft Word has an internal thesaurus, so I delved into it to replace the word "Void". Perhaps The Screaming Abyss? But "Screaming" also seemed too obvious, and not nearly creepy enough. Whispering? Laughing? I settled on "Giggling", and am glad that I did.

Purple Duck Games has extremely generous Open Gaming Content - all of the writing that isn't specifically Product Identity is usually OGC. I say "usually" only because there may be an exception or two somewhere that I am not aware of. What this means is that the Goremera can appear in another adventure (where its death is not permanent, so beware!) and jelly ants can invade whatever adventure site any publisher (for profit or not) may be working on. This is not only allowed - it is encouraged!