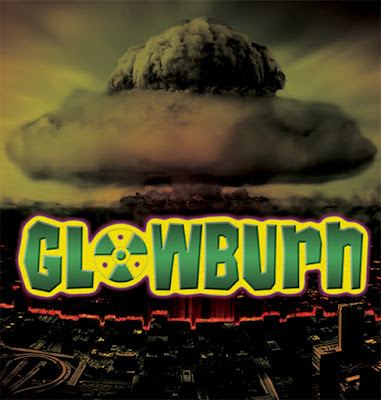 Glowburn is a podcast about the Mutant Crawl Classics role-playing game and old school post-Apocalyptic adventuring. It is hosted by Bill Hamilton and Forrest Aguirre.

The second role-playing game I ever played was the 1st edition of Gamma World. What a delight, then, to discover that Jim Wampler and Joseph Goodman have cooked up Mutant Crawl Classics, a post-Apocalyptic game which is fully compatible with DCC. Glowburn is a podcast about both the new game and the old ones, and one which has come to us before the Mutant Crawl Classics core rules are released.

At the time of this writing, there are four episodes of Glowburn available. They include an examination of Crawling Under a Broken Moon, of the Spaceship Warden from Metamorphosis Alpha, archaic alignments, and an introduction to the genre itself. If you are at all interested in post-Apocalyptic gaming, this podcast comes highly recommended.

The only complaint I have, in fact, is that the hosts keep coming up with cool, game-able material that they say will be available in the show notes....but there is no link on the podcast site to these notes. Glowburn does have a G+ Community, where show notes are posted, but as far as I can tell without call-outs to the cool stuff that the hosts have created. When the hosts say a new monster is going to be in the show notes, I want to run that monster, dagnabit.

Listen to it Here!