The Goblins of the Faerie Woods 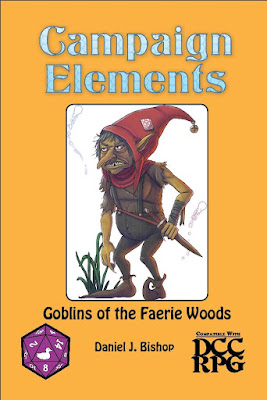 CE 8: Goblins of the Faerie Woods was written by Daniel J. Bishop and illustrated by Gary Dupuis and Brett Neufeld. Cartography is by Tim Hartin. The publisher is Purple Duck Games.

Like all of the Campaign Element series, this product seeks to add material to your campaign milieu that you can use over and over again. It also has obvious tie-in value to the Faerie Tales from Unlit Shores series.

Herein you will find two five-level classes for goblins, who can become goblin warriors or goblin witch doctors. as well as rules for 0-level goblins. When I was working on my own game system (Raven Crowking's Fantasy Game, or RCFG), I did some work to recast goblins, including the basis that forms the goblin witch doctor class.

Readers of the CE series will notice that, quite often, I include places where PCs can gain information for a price. This is intentional. In a game where "Quest For It" plays such a prominent role, the ability of the players to gain information is vital. Likewise, the opportunity for the judge to plant adventure seeds is extremely useful.

Some notes on things: