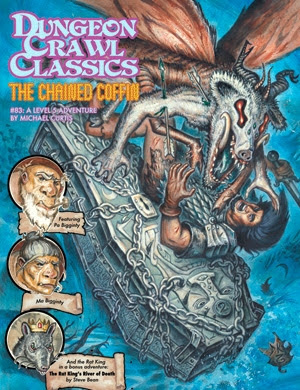 DCC #83, The Chained Coffin, by Michael Curtis, is available both as a stand-alone module, and as an amazing boxed set. I was lucky enough to be given an (uncredited) chance to playtest this adventure, and it went very, very well.

I have already written about this adventure here, and my comments still stand. In addition, I will point out that The Chained Coffin Companion contains most of the creatures one would otherwise wish statted up from Manly Wade Wellman's stories. It is extremely well done.

I have since run Sour Spring Hollow, both in real time and via play-by-post. As a 0-level funnel, this is poses a rather tough riddle which can easily lead to a TPK. Completely fitting, in my humble opinion, but some players may complain....I wonder why? It is the easiest thing in the world to make some new 0-level characters and either try another funnel or, if the judge so decides, try again. Perhaps a generation later....

I have still not had the chance to run Steve Bean's companion adventure, The Rat King's River of Death. As much as I enjoyed reading this adventure, I have to question its inclusion in an adventure that ended up in an otherwise wonderfully themed boxed set. Mind you, it is not the adventure I am questioning, but how it plays into the fantasy Appalachian theme.

A whispered voice calls from a coffin bound in chains, urging the heroes into the depths of the Shudder Mountains, a place rife with superstition and forlorn secrets. In the shadowy, pine-grown valleys of the Deep Hollows lurk mysteries of a bygone age and a new evil emerging from the ruins of the past. The adventurers must plumb the mountains’ secluded reaches to root out this rising terror before its power comes to fruition. Standing in their path are cackling witches, subtle devils, lingering spirits, and a foul thing that moves in the night. Can the heroes appease that which lies within the Chained Coffin and thwart the dawn of a new and terrible age?