Drongo: Ruins of the Witch Kingdoms 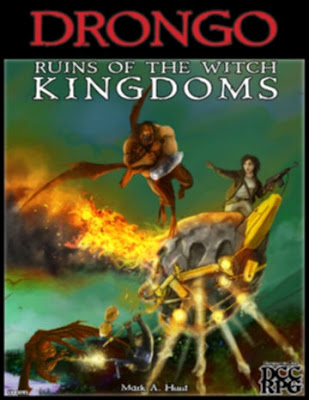 Drongo: Ruins of the Witch Kingdoms was written by Mark A. Hunt. Illustrations are by Juan Ochoa. Drongo was published by Leviathan Publishing.

This book is a sourcebook to help you and your players explore the planet Drongo. If you are not running a game set on Drongo, the book still offers quite a few resources for science fantasy games (such as those of Crawljammer and Crawling Under a Broken Moon, the Purple Planet, or Madkeen). Even if you are running a more standard fantasy milieu, there is material here you may find useful.

This offers a fairly basic description of the history, civilizations, geography, and points of interest on the planet. These description are basic enough that no two judges' Drongos will be the same. There is a global map on page 4, but the map contains nothing that will help you decide where things on Drongo are. I am not even sure if the darker areas are land or water....is Drongo an extremely dry world, or a moist one?

There are some really good hooks for adventures here, but a clearer vision of the planet would be appreciated. Perhaps in a future product?

This chapter actually gives players and judges a lot of material to work with. New characters roll for physical build, home region, and year of origin as well as occupations. This is excellent stuff, and usable in any game where you are going to mix modern characters with your fantasy...as occurs in many of the Appendix N works.


All of these classes seem to be pretty well balanced against each other, and against the classes in the core rulebook. You could easily allow any of these classes in another Dungeon Crawl Classics milieu, and they would not be overshadowed if you allowed classes from other sources onto Drongo.

Unfortunately, the psionics system offered by Drongo: Ruins of the Witch Kingdoms is the Dungeon Crawl Classics spell system with the serial numbers filed off. It works, but it doesn't stand out. However, there is no reason you could not use a different psionics system on Drongo, such as that in Mind Games.

This chapter does stand out, with an excellent discussion for understanding alien technology, a lot of useful (and well described) pieces of technological gear, and a discussion of tool use that is absolutely spot on.

The sections on firearms and super science are good, but the discussion of ray guns make them downright frightening. Which is, when you think about it, exactly as it should be.

An excellent chapter that describes creating science fantasy adventures in the planetary romance genre. In addition to more background information on Drongo, there are comprehensive rules for diseases, relationships (including romantic ones) and the sort of hirelings adventurers stuck on a planet like Drongo might need.

The discussion on Boss Fights is useful for any judge looking for ideas to beef up an encounter.

There is a system for making what is probably an unlimited number of aliens to intrigue and bedevil your players. In a non-Drongo game, this could be used to create unique monsters instead.

Other creatures, warbots, and stranded humans are also useful.

Overall, this is a good reference work for planetary romance games, which has value for any flavor of Dungeon Crawl Classics. The biggest downside is that the setting isn't fleshed out...and, in particular, the map is of limited use. If you are happy to do that work yourself, that may even be considered a strength.

Get It Here.
Posted by ravencrowking at 08:23