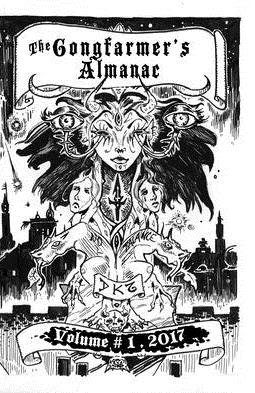 Welcome to Pandemonium: Author Harley Stroh provides the basics of Pandemonium, including why someone might want to travel there and what one might encounter. "Our world is not alone. Rather there are hundreds, no thousands, of other realities, each home to people and powers like our own. These planes and demi-planes are all connected by an ever-shifting sea of the mutable chaos-material known as phlogiston, and when – like a wave casting foam droplets from the sea – these take brief material form, it gives birth to the lands of Pandemonium."

There are things worth recovering from various areas in Pandemonium, but travel requires passing through one or more "hexes" to reach any given location, where a "hex" denotes a world in miniature, which can be of any size at all.

There is also a chance of encountering deadlands, where entropy is enervating all within the hex, or new lands, which are freshly born from the raw material of Pandemonium.

The remainder of the volume is given over to describing some of the hexes of Pandemonium.

Abyss of Automatons: Keith A. Garrett supplies a Hell for robots and their ilk, which would provide a good transition between Mutant Crawl Classics (or Crawling Under a Broken Moon) and more standard Dungeon Crawl Classics fare. This is also a great location to include any robot (or near robot) you fancy from the media of your choice: Daleks, Terminators, C-3PX, or an R2 unit with a bad motivator.....

Helljammers of the Crashed Plains: Julian Bernick brings the Crawljammer universe into Pandemonium with a visit to the Crucial Observatory of the Voidlings. These are beings who tried to bind the powers of Hell to their will, and failed miserably, creating a Pandemonium hex which is inhabited by demon-saur war-machines (which may, perhaps, end up in the Abyss of Automatons when destroyed) and the voidlings, who travel using soulburners - flying skiffs powered by souls of ritually sacrificed beings.

Hunting Preserve of the Cambion Queen: Another hellscape, brought to you by Gwendolyn Harper. Tamarah Pandoramicum, the Cambion Queen, hunts "those who have displeased her, as well as those they bring here from other worlds" across a wasteland of howling winds and monstrous hoodoos, where "all smells sweet but charred". If you were hoping for a plethora of well-developed demons, the author has provided!

Labyrinth of the Elder Minotaur: Finally, Tony Hogard provides a vast Primal Labyrinth that is not another version of Hell! Or, actually, perhaps it is. Here the Elder Minotaur dwells, and, although "the abandoned treasures of a thousand lost explorers" may be found in its darkened halls, so too can the bones of many an explorer.