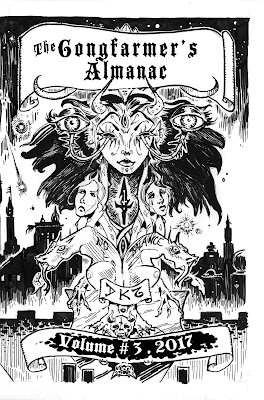 This volume describes more of the hexes of Pandemonium. Let's look inside.

The Quagmire of Endless Malice: Written by Steven Bean as "A Pandemonium Hex for 5-6 PCs of Levels 3-5", this has the distinction of being the only hex explicitly designed for a specific character level. The Quagmire has links to both Ahriman and Azi Dahaka, affixing it to the corpus of core DCC. The author also supplies a relatively unique experience (as of this writing) in DCC adventures - the chance to command a military force. Simple rules are provided, which could surely be used for other large-scale battles as well.

The Swamp of the Oboline: This hex, by Richard Rush, offers the "humid jungle swamps of the oboline are the dank and miserable home to Harikag, alleged to be a fecund avatar of the World-tree, and the two godlings Manateecuhtli and Quetzalcoautwalrus and their interminable, pointless conflict about which limp saplings growing in this forlorn place is actually Harikag." Information on the two godlings is found in Volume 5.This hex is a combination of squick and whimsy.

The Burnished Court: "The Burnished Court is both an entity and a location, being the physical nexus of the inquisitive chaotic immortal known as the Meniscus." Author Danny Prescott creates a prismatic mirror world, and gives a partial patron write-up for the Meniscus, including both invoke patron and Patron Taint results. The location stands out by being very different from the other Pandemonium hexes in this year's Gongfarmer's Almanac.

The Ichor Pits: A crater of sunken ichor pits, fiends, and un-dead creatures, by Nick Serluco, this hex is ruled by Ostorax the Gravehand. There is a magic sword, Valorsbane, which requires divine intervention or taking Ostorax as a patron to obtain. Unfortunately, patron information is not included....perhaps in 2018?

The Lost Tower of Talos: Finally, Hector Cruz introduces a hex which was once the realm of the Bleak Cabal, a group of wizards and clerics who worship Talos. Now it is a realm of "chaotic magic, spirits, strange creatures, and echoing chants" that emanate from the Lost Tower. With giant mushrooms, eerie lighting effects, and wandering spirits, the Lost Tower is also the home of a specific treasure hoard - it is nice that there is not only a reason why the PCs may wish to escape this hex, but also a reason why they may want to seek it out.

The sample hexes provided in the first three volumes of the 2017 edition of the Gongfarmer's Almanac whet the appetite for more. Given the infinite potential of Pandemonium, I hope to see more hexes in future years, both in the Almanac and elsewhere. Great work by everyone!