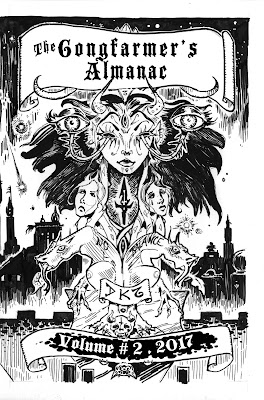 This volume describes some of the hexes of Pandemonium. Let's look inside.

The Big Rock Candy Mountains: If, like me, you enjoyed O Brother, Where Art Thou?, you might be expecting a different description of the Big Rock Candy Mountains! In Pandemonium, this is a form of Candyland where children become sugar thralls (or worse). Monsters resemble well-known children's games and confectionery treats, but author Jeff Goad displays a wickedly twisted sense of humor, and doesn't leave it at that. This hex could easily be used in conjunction with Faerie Tales From Unlit Shores, Perils of the Cinder Claws, or Lamentations of the Gingerbread Princess.

The Big Festering Giant: Perhaps you think BFG stands for Big Friendly Giant? Perhaps not to be outdone by Jeff Goad in twisting childhood memories author Keith Nelson introduces the Big Festering Giant, a colossal near-corpse that you can squick about inside. This is actually a lovingly rendered text of a rather unlovely subject, and includes the rather interesting Among the Mite-Goblins on the Shores of Lake Urine: An Introductory Encounter to the BFG.

Monsters of the Big Festering Giant: Keith Nelson also includes "a brief selection of the mundane and bizarre inhabitants and active perils of the creature colloquially known as the Big Festering Giant, or BFG." A full dozen monsters are listed, some with varieties thereunto. Here are some encounters I worked on, which might also be usable in the BFG.

The Black Iron Citadel: Dan Steeby offers a scorched desert cavernscape, dominated by a "massive structure with the shape of a colossal humanoid form, seemingly crouching in a pitiful, cowering position, with massive arms thrown over its tusked face as in a final ward against its doom." This is the Black Iron Citadel, ruled by the demon prince Pazuzu. PCs may also meet his "supremely bored and petulant" daughter, Lilitu.

The Boreal Wastes: This hex, by Harley Stroh, with additional material by Marc Bruner, is exactly what it sounds like: a vast icy wasteland with enormous ice ridges and ruins half-buried in the snow and ice. Most of the hexes thus far have been based on twisted childhood themes or hellscapes, so the Boreal Wastes come as a nice change. I am left wondering whether some of this material was unused from the beginning of Journey to the Center of Áereth?

The Carousel of Doom:  This hex, "a mutated carnival of insanity, guilt, and agony" also deals with childhood themes. It also includes platypus cultists and marsupial face huggers, so a good time is sure to be had by all. If your players visit this hex of Pandemonium, be sure to thank SGT Dave, the writer, for delving into the Ruins of Make-believe.

The Forest of Nedra: Finally, Marc Bruner offers "A shadow land of grey twilight" existing "between states of reality, filled with objects both half-formed and those seemingly etched into the fabric of creation itself." A faerie-based hex, this has a Dark River that strongly reminds me of the enchanted stream through Mirkwood in The Hobbit. A portal could easily link this hex to Goblins of the Faerie Woods or the Goblin Market in Creeping Beauties of the Wood. Or both.