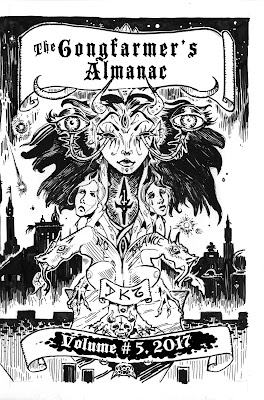 Agents of Egris: Author Aaron Robinson describe the warped and disfigured creatures that had one been mortals in the Cult of Egris. These Agents often enhance "their own anatomy with the diabolical, bio-mechanical devices bestowed upon them by their overlord as favours. These augmentations often take the form of strange, bird-like appendages and limbs; tributes to the avian form of their tyrannical overlord."

Amplexator: Clayton Williams offers a strange creature which is attracted to light, which seem to be a very strange take on the traditional lurker above. This creature is described as being "found in the first level of Pandemonium, Pandesmos", which suggests a planar cosmology somewhat different than what is suggested in Volume 1, but, then, Pandemonium is Chaos itself, so who is to say?

Sofa Siren: And then you see your grandmother sitting on the sofa. She pats the seat. "Sit down and relax". But this isn't really your grandmother. It is a sofa siren, Penny and Dylan Spaniel's  "ancient shapeshifters having a common ancestry with similar creatures that surround themselves in treasure awaiting careless adventurers to greedily stumble into their traps." Delightfully, there is a d24 table for items if you search the body (something has always fallen under the cushions!).

"Culmenthdor was once a being of curious power, any creature he mortally wounded became part of him, increasing his strength, mass, and abilities. Consumed by an interminable bloodlust, Culmenthdor burned through the planes, devouring all in his way, until his existence proved to be a threat to powers far greater than he.

The ancient gods found that Culmenthdor could only be permanently reduced in power by separating parts of his mass from his main body. In an act which sent ripples of planar distortions cascading through the cosmos, Culmenthdor was rent into atomic pieces and scattered to the stars. The threat he posed effectively removed for the time being, Culmenthdor passed from memory. Over time, Culmenthdor’s fragments have sought life, and the power to combine his pieces until he can return to consume once more."

New patrons are always nice to see, especially those which have been fully fleshed out. This patron might be more useful to the judge, but I can see greedy players, willing to gamble for power, bonding to this demon.

Blood Fang of Culmenthdor, the Sundered: A magical "dagger" linked to the level 3 patron
spell, Madness of Blood, and Culmenthdor's Invoke Patron results.

Manateecuhtli: Linked to The Swamp of the Oboline in Volume 3, "Manateecuhtli, It of the Hundred Heads of a Hundred Hands, furiously thrashes beneath the leaves of Harikag. It’s great bulk is the dark honey color of an unnatural bronze, and where a less fearsome being’s face and head would be is but a seething mass of luminous blue centipedes that periodically drop off and begin crafting engines of destruction. Manateecuhtli calls for any brave enough to submit to it to join its legion, which it spends carelessly upon whatever is currently the subject of its ire."

Author Richard Rush offers a full patron write-up. Manateecuhtli does not offer unique patron spells, however, but may teach specific spells from the core rulebook.

Quetzalcoautwalrus: Richard Rush then describes the Feathered Pinniped, which "gently floats beneath the boughs of the Harikag. Its skin fluctuates across each of the 89 colors of the 13 secret rainbows, and its feathered frill gently sways in the winds of time. Its massive tusks dangle, pointing to the root tree and the center of reality. It has always been, and will always be. It contemplates and ponders. It ruminates and incorporates. It knows nothing and understands all."

This being is also linked to The Swamp of the Oboline in Volume 3. A full patron write-up is included. Like Manateecuhtli, Quetzalcoautwalrus does not offer unique patron spells, but can teach specific spells from the core rulebook.

The Spawn of Skach: Author Jim Kitchen is not credited as an artist, so this may well be the only article in this volume which is not also illustrated by the (or, in the case of the Sofa Siren, one of the) writers (assuming SGT Dave is also the illustrator of his piece, below, which seems quite likely).

"As adventurers travel throughout Pandemonium their paths may take them to places unimaginable. In their journeys, they may encounter a random, dusty scroll lying untouched in a forgotten library, a simple beggar whispering to the wind, or the smoldering, burned out ruins of a razed village. It is only the most astute that will slowly grasp the implications of those scraps of ancient text, the raving babblings of a sensesshattered, shocked survivor, or the pitiful remains of formerly thriving civilizations. Once known there is no forgetting by any means imaginable one of the infinite planes’ oldest, deadliest, and most capricious of perils, the Spawn of Skach."

This would appear to be a long, good-natured, in-joke referring to Jim Skach, well known gamer, father of gamers, runner of Dungeon Crawl Classics and Mutant Crawl Classics, Old School Gamer, and editor of The Gongfarmer's Almanac. I would like to say whether the descriptions were accurate or not, but there are levels of cosmic horror I have yet to be subjected to....

EDIT: From Jim Skatch to the DCC G+ group:


It is less an in-joke and more an homage to the deadliness the characters of my children often display. They are smart. They are vicious. They can be relentless. And they do not like to lose.

I'm not sure how they got this way...

Two things: 1) +Jim Kitchen is simply an awesome person and I and my children are honored he would take the time and make the effort to do something like this, and 2) well-known...ha!


Flash and Twilight: The Princes Flash and Twilight, royal heirs to the King of the Light Elves, are presented as an alternate patron for elves ("the royal princes have little concern for the other, short-lived races of the world"). Author SGT Dave provides a complete patron write-up, including three patron spells.

In addition, artwork depicts 6 "Wandering Monster!"s scattered throughout the volume. Statistics are not provided, so if you create some of your own, please add them to the Comments section of this post, either directly or through a link to your blog or website!

There is also one piece of art "This is an Egress to Hell" that stands on its own.