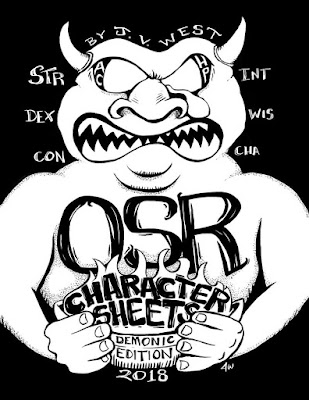 Anyone familiar with The Gong Farmer's Almanac has seen character sheets created by James V. West. Here, you get a Pay-What-You-Want pdf file that includes six different half-sheet Dungeon Crawl Classics character sheets and one full-page DCC character sheet. One of the half-page sheets would definitely suit a Crawling Under a Broken Moon (or similar) character.

Be aware that you can crop an adobe acrobat page in order to force a half-page sheet to automatically scale to a full page when you print it.

There are also some character sheets for other OSR games. The author writes:

This is a collection of character sheets for OSR games, such as Labyrinth Lord and Swords & Wizardry and whatever else you like to play. It also includes some DCC RPG sheets. Most of these have been posted online and/or appeared in my zine Black Pudding.

These are hand-drawn in a mix of traditional and digital media.

There are about 9 or so OSR sheets with the classic five saving throws and usually an AC to-hit table.

There are a handful of repeats of those sheets converted to modern gaming traditions such as to hit bonuses and a single saving throw.

There are a few DCC RPG style zero level sheets.

There are a couple of campaign notes sheets. These are useful to hand out to players so they can write things down instead of constantly asking you "What was that one guy's name again?"