The Perils of Cinder Claws 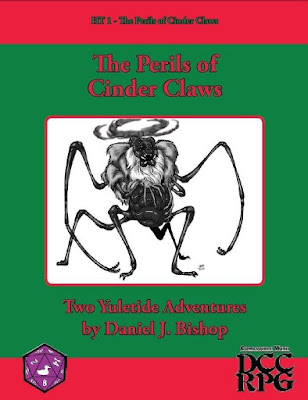 HT 1 - The Perils of Cinder Claws was written by Daniel J. Bishop, with art by Jacob Blackmon and Christina Stiles. Cartography is by Kristian Richards. The forward, "A Tale of Madness", was written by Mark Gedak. The publisher is Purple Duck Games.

This product contains two holiday-themed adventures, The Thing in the Chimney (1st level) and The Nexus of Yule (3rd level), as well as the Cinder Claws himself as a potential patron (complete except spells).

The Thing in the Chimney

"The fruitcake lies dreaming about distant planes, and is at first not aware of the characters. However, as it slowly becomes aware of them, it begins to exert a strong, alcohol-soaked odour of candied cherries and rum. Creatures who are within 10 feet of the fruitcake are enticed to eat it, and must roll a Will save (DC 10) to avoid cutting off, and consuming, a slice."

What could go wrong?

My initial run of this adventure saw one PC have his arm broken (and die!) when a snowman made a critical hit with an icy snowball. One player ended up with tinsel spider goop around his sword and hand, rendering it useless, but was able to find paint thinner to use as a solvent in the workshop. Another player ended up with a goblin servant in their stocking...I used the material on "Variety in Humanoids" and "Familiar Personality" in the core rulebook to make this fellow a memorable character.

The most recent time I ran it, the players were mostly concerned with the mistreatment of the elves and reindeer. They were delighted to recognize that a Tyrannosaurus Rex was being roasted in the kitchen - a detail most players in my experience gloss over.

I have run the adventure several other times as a public game to good effect. Finding out what's in your stocking at the end is always a highlight. I strongly recommend letting the players roll at the end, and allowing them to spend Luck if they so desire. Note that the possiblity of getting a hat that makes you look stupid is an intentional nod to Firefly.

The Nexus of Yule

This adventure is a follow-up to The Thing in the Chimney, and is suitable for 3rd level PCs. Another Yuletide approaches. Although his powers ebb during the warmer months, with the colder days and longer nights, the Cinder Claws now has the arcane energies required to draw his victims into a tiny portion of the Nexus of Yule, an inter-dimensional web which allows the Cinder Claws to reach into an uncounted number of homes, all on a single night.

(If anyone knows the post to which I am referring, please link to it in the comments!)

In any event, here is a Yuletide adventure that offers essentially unlimited access to people's homes one night a year (if you make a bargain with the Cinder Claws), cannibalism, the Little Drummer Boy having been eaten by carnivorous livestock, rats fighting the Nutcracker people in all-out war, golden angels that might kill you, Grendel, and more.

Because, this time, the Cinder Claws wants the PCs to become his agents.

Doors shall open for you that would otherwise remain forever closed. Ho ho ho! You shall keep the Yuletide in your hearts all the year round. More than that I will not say. Ho ho ho! I despise those who wish to peek beneath the wrapping, and, if you become My agents, you will discover what gifts I bring soon enough! And if you do not, Ho ho ho!, it is my wish that you forever wonder what you have given away. For I am a generous Master, but not a kindly one!

While I was working on this adventure, Goodman Games announced their first holiday adventure, the excellent The Old God's Return. The climactic encounter of The Nexus of Yule is firmly tongue-in-cheek, but also recognized that coming of new holiday adventures by others:

“Mortal children, I have allowed you entry into the Nexus of Yule, that you may come before Me in the center of My web. Is it not delightful? Ho ho ho! It intersects worlds beyond count, and snares people beyond number, and all their celebrations bring power to Me!” The creature frowns. “Yet not to Me alone, for others now traverse the Nexus, who would remake Yule into their own image, and who would steal My food from My web.”

Conceivably, The Nexus of Yule could thus be used as the linchpin around which other holiday modules are secured. The PCs have a reason to interact with these adventures - but their motives might not be the same as the adventure writers had imagined!

A patron write-up for the Cinder Claws was necessary because of the ending of The Nexus of Yule.

"The Cinder Claws is a Yuletide Spirit. He claims to be the oldest and most powerful of such spirits, but who is to know for certain? From his dwelling in a frozen wasteland in the far north (or on another plane) he comes forth each year at the winter solstice to bring questionable gifts to worry an already troubled world. What the Cinder Claws’ goals are is difficult to discern. His gifts, even to those who oppose him, are not always bad. Sometimes they are wonderful. He is a force for Chaos though, an old evil spider who crouches in the center of a frozen web."

Everything is included but the patron spells:

These may be part of a third Cinder Claws adventure at some point, written by myself or by another!

At the waning of every year, as the sun grows closer to the horizon, and spends less time in the sky, there comes a time of terrible cold and deep snow to the lands of the north.   The world waits with hushed breath for this, the longest night of the year, to be over.  Soon, the sun will begin to climb higher each day, and the days grow longer.  Although long stretches of cold weather are yet to come, this is the night in which winter’s back is broken.  After tonight, the world turns slowly back to warmth and light.

But that is after tonight.