Pulp Weird Encounters #1: The Tomb of the Squonk and the Silent Army 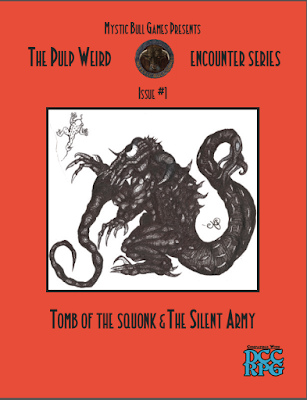 Pulp Weird Encounters #1: The Tomb of the Squonk and the Silent Army was written by Daniel J. Bishop and Charlie Scott, with art by Nik Wolfe (including cover) and Rick Hershey. Cartographer is by Joshua Burnett. The publisher is Mystic Bull Games.

Disclosure: I am one of the authors.

As the name implies, this product was meant to be the first in a series of Pulp Weird Encounters published by Mystic Bull Games. While I cannot say for certain about The Silent Army, I know that Tomb of the Squonk was originally written for In the Prison of the Squid Sorcerer, but didn't fit within the space of the book.

Pulp Weird Encounters #1 contains two adventures: Tomb of the Squonk by Daniel J. Bishop and The Silent Army by Charlie Scott. Interestingly enough, both include alien technology as significant elements.

Tomb of the Squonk (Low to Mid-Level, by Daniel J. Bishop)

A hideous creature asks your help to regain his rightful body.

This adventure is heavily influenced by the World of Tiers series by Philip José Farmer. So much so that there are rules for creating Patricians - a group of human-appearing interdimensional beings that fight in an endless internecine conflict that they term “games.” The point of these games is to humiliate, and eventually to kill, the other Patricians through a “board” that consists of multiple universes, on a playground that includes other times as well as other spaces.

The cover illustration predates the adventure, which was designed to make use of it. If you are familiar with North American lumberjack mythology, you will recognize where the squonk comes from.

The titular Tomb is actually a death-trap designed to slay all who enter. It includes a white-furred temporal serpent that predates a similar occurance in Glipkerio's Gambit (and which is itself a nod both to Philip José Farmer and Fritz Leiber's Nehwon). Despite being a death trap, a clever party can survive with minimal (or no) loss.

The adventure also includes a number of gates, so the prospective judge should have other locations to hand in case the PCs pass through one or more of them. When I first ran the adventure, as a home game playtest, the PCs entered into the world of Lamentations of the Gingerbread Princess (converted from Lamentations of the Flame Princess. When I ran this at Gary Con IX, characters ended up first in the Saturn of The Weird Worm-Ways of Saturn and The Vault of Ash, and then in The Giggling Deep.

I strongly recommend that the judge throw the players into the new location in media res, rather than at the normal adventure start. Adventure conversions from almost any system would be appropriate.

The working title of this adventure was The Cyber-Satyr, and you will find it referenced as such in Tomb of the Squonk. This adventure is really written as a fairly linear side quest, but one that foreshadows an alien invasion. Note that the actual invasion can be generations hence if the judge doesn't want to address it, or next week if she does.

Note that "the entirety of this work is designated as Open Gaming Content" except the Product Identity, which are mostly terms so designated by Goodman Games. This means that, if you wish, you can create and publish an adventure that follows up on either The Silent Army or Tomb of the Squonk. I would buy it. Neither the Patricians nor the alien Tsinchin are Product Identity.