The Ooze Pits of Jonas Gralk 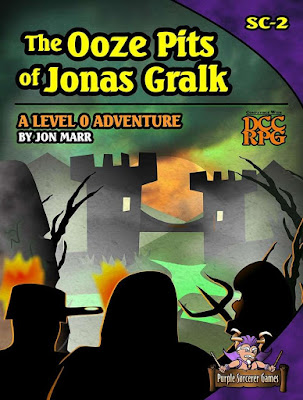 The Ooze Pits of Jonas Gralk is a 0-level funnel adventure by Jon Marr. Art is by Jon Marr (including cover and cartography) and Benjamin Marr. The publisher is Purple Sorcerer Games.

Note that this adventure is included in The Sunken City Omnibus. It uses the same backdrop of the Great City and the swamp-covered Sunken City that was introduced in Perils of the Sunken City:

"The Great City is old and faded, a pale reflection of its former glory. Life is a challenge for most, but for the weak and unconnected, the city is a place of unrelenting hardship harboring neither hope nor promise of escape.

With one exception: the Sunken City.

Most find death in the crumbling ruins that stretch beyond sight into the mists southward; once rich districts now claimed by swamp and dark denizens. But for the desperate few, the ruins offer treasures the Great City denies them: fortune, glory, and a fighting chance!"

This is, I have to admit, my favorite Sunken City adventure. It has a small village to explore, a wilderness region, and not one but two semi-ruined castles to explore. The encounters run the gamut from the whimsical to the rather serious, with things both mundane and extraordinary to deal with. The titular Ooze Pits are actually Lovecraftian - although one might also be reminded of Spirited Away.

Purple Sorcerer Games adventures are notable for the extras they provide. In this case, you get a pdf document so that you can print out Appendix A: Rumors, Appendix B: Clues, Appendix C: Slither’s End on 5 Smiles a Day!, Appendix D: Tollybogs!, Appendix E: Villagers at the Fair, Appendix F: The Mist Men, and four pages of pregenerated 0-level characters from Slither's End, which are suitable as replacement PCs. But that's not all, because Purple Sorcerer Games also supplies free printable battle mats and paper miniatures!

Do you dare re-enter the deadly swamps of the Sunken City? The hamlet of Slither's End needs your aid, but after meeting the bizarre locals, you might wonder if you need someone to protect you from Slither's End! Can you unravel the mysterious abductions plaguing the town? Do you chance trekking through the open swamp seeking answers when death lurks around every bend? And who is this Jonas Gralk that everyone mentions with grave suspicion?  Answers await in The Ooze Pits of Jonas Gralk!