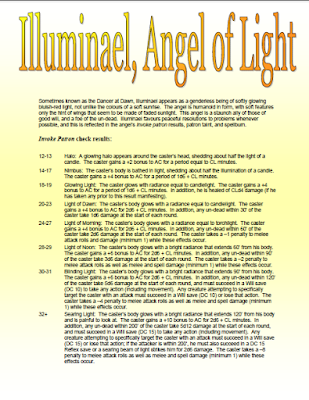 Disclaimer: I am the author and publisher.

Most years, the limitations of travel prevent me from going to little more than Gary Con, with the occasional convention in Ontario or abroad if I am travelling. In 2020, however, every convention was perforce a virtual convention, and I ended up running games are far more of them than usual. This was produced as a virtual swag item for the first DCC Days Online convention.

When Angels, Daemons, & Beings Between was first being outlined, I had intended to create three angels for the product. Lavarial, Angel of the Temple, was the first of these, and she made it into the book. The other two I had intended to create were Michuval, Angel of War, and Illuminael, Angel of Light. In both of thee later cases, a full patron is provided with the exception of detailed patron spells. And, in both cases, when I was looking for material I could quickly turn into virtual swag, they were at hand. The original idea, of course, was to show that the forces of Law could be as varied and interesting as the forces of Chaos!

In any event, these three angels are now available for your campaigns.

Sometimes known as the Dancer at Dawn, Illuminael appears as a genderless being of softly glowing bluish-red light, not unlike the colours of a soft sunrise. The angel is humanoid in form, with soft features only the hint of wings that seem to be made of faded sunlight. This angel is a staunch ally of those of good will, and a foe of the un-dead. Illuminael favours peaceful resolutions to problems whenever possible, and this is reflected in the angel’s invoke patron results, patron taint, and spellburn.