Tales From the Magician's Skull #1 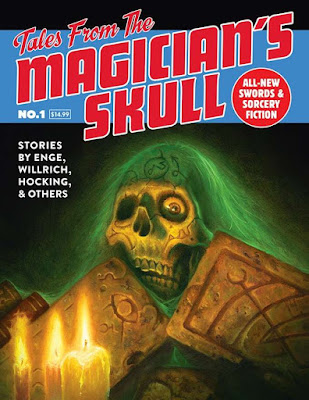 The Martian Vizier talked about this issue here. If you are interested in Tales From the Magician's Skull primarily as a conduit for fiction, the Vizier's Views will supply that information. As happy as I am that an outlet for new sword & sorcery fiction in exists, in this blog post I am focusing on the issue's gaming material.

Disclosure: I backed the successful kickstarter for this issue, and am included in the Chapters of the Skull on page 4 (Order of the Crowking) and am listed in The Legion of the Skull. I am also the writer of the afore-linked Vizier's Views article.

A long time ago, I came across Translating  Skitterbuggers Into Traveller by Steve Winter in Dragon Magazine #59. That was May 1982, and I was 15 years old. I had statted out a lot of creatures from books I had read, from TV, and from movies, but this was the first time I had seen the format: Here is a story; here are the stats. In Tales From the Magician's Skull, you have to flip a few more pages, but the idea is the same.

It should be noted that statting out materials from fiction is as much an art as it is a science. Sometimes the game material is inspired by the source material more than it is a faithful reproduction thereof. The same is the case here.

Beneath the Bay of Black Waters: For this story we have the dragon's egg (magic item: a sort of light source and grenade) and the guai (a creature reminiscent of the Deep Ones).

Beyond the Block: Terry Olson provides us with the potion of un-death, a sort of last resort for vengeance.

Crypt of Stars: Statistics for the gatzi (dangerous flying creatures who become frenzied by the smell of blood and leave rotting wounds), divine familiars, and Palhecoc, which serves as a sample divine familiar.

The Crystal Sickle’s Harvest: Statistics are given for the crystal-sickle wraith (armed with a crystal sickle) and a class of magic wands known as Nobleman’s Comforts (3 examples are given).

The Guild of Silent Men: The coldlight (which may, or may not, be magical, but which is another non-torch/lantern light source, the talisman against illusions, and a 3rd level spell (illusion) are described. With this spell, the caster creates the illusion that his body has another form. Unlike the phantasm spell, this illusion has aural and tactile elements in addition to its visual deception....

There Was an Old Fat Spider: Naturally, the spider itself is described. Also the spiderling swarm, the magical sylvan cloak that makes its wearer invisible, and the level 1 wizard spell, witchfyre. Witchfyre is a fusion of raw phlogiston and glowing elemental energy. Casting it is unpredictable, as it can have both offensive and defensive results....

What Lies In Ice: Stats are given for the hands of the sea (a swarm), the imperishable hand with the gemmed phylactery, the colossal brain-poxed squid, the monstrous iron head, and the mutomorphic flyer (complete with a "Muto-Attack Table" with 12 results). In addition, you get the gyrekin race/class:

You are a creature birthed between the planes of elemental water and prime material. Your natural form is that of a shining liquid vortex (see below), though you can transform into a form similar to a human’s to walk on land and breathe the air. However, there is always some not-so-human feature, such as gills, webbed fingers, second pair of eyelids, a dorsal fin, etc., that betrays your true origins. While the less adventurous of your kind stay in the water, teasing mariners with visions of fish-tailed women, unattainable gold in the shallows, land on the horizon that never gets any closer, and other such illusions, you prefer the company of the land-based races. Consequently, you divide your time between land and water, changing from your humanoid to vortex form as needed. Water is your element; you can manipulate it, summon creatures from it, and outperform any other class within it. Indeed, you can even cast spells completely submerged!  On land, however, you have a limited time to perform your best. Eventually you must return to water, or perish.

Tales From the Magician’s Skull is a fantasy magazine dedicated to presenting all-new sword-and-sorcery fiction by the finest modern crafters in the genre. These stories are the real thing, crammed with sword-swinging action, dark sorceries, dread, and ferocious monsters — and they hurtle forward at a headlong pace.