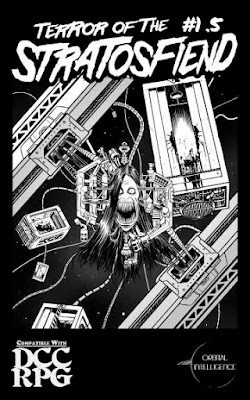 Terror of the Stratosfiend #1.5 Preamble to the Melancholic Terminal Ascent was written by Sean Richer. Art is by James Everett Jackson (including cover), Krzysztof Bieniawski, and Shane O'Neil. The publisher is Orbital Intelligence.

As packed as it was with material, Terror of the Stratosfiend #1 apparently didn't cover everything that the author wanted it to, because a #1.5 issue came out before #2! Like the first issue, it is pretty impressive, so we might as well jump right in!

An Introduction to Elevators: An introduction And, of course, notice that there is a god of elevators. And, yes, that is her on the cover.

Classes: Human Comm-Artist: "The Comm-Artist is a rogue engineer that excels at setting up information relays, turrets, and long distance networks. Most communities would collapse without them, and even the most basic of trade would fall through. Radio waves course through their veins, and exposure to data in all forms amplifies their nervous systems. Through deals they have brokered with the Orbital Intelligences, they've been gifted the ability to channel this data and bring life to machinery; specifically traps."

Adding this class to the ones we had in Issue #1, I am again struck by both the creativity of the author and the logistics of devising adventures for these characters. The adventure would be awesome, mind you, but it would require some serious calculations to work for the main classes in this milieu.

Spells and Patrons: We gain the animate trap familiar spell, which is necessary for the Comm-Artist, but which could potentially be used by other classes. The judge may wish to impose size limits as to what traps can be animated enough to move around.

Acceptance, The Root Organ-Fractal: This is "a patron that is best described as a headless body of bodies of bodies of bodies. Its patron magic will mutate the casters' bodies and gift them with all the auxiliary limbs they could hope or dream for." Acceptance started out as the body of the decapitated Razor-Worn (see below).

"Acceptance was once the shed body of Razor-Worn, and served as her most devoted follower. Even though she had lost her body, Acceptance made sure it would still be there for her. Without a head, the body was dying, and an Organ-Fractal cluster was applied to save it. Organ-Fractals are biological machines that heal and then replicate themselves, mostly. As the body healed, it's limbs became bodies, and those bodies' limbs became bodies."

Razor-Worn, Henceforth the Shaft: The god of elevators, who "lashes at all that oppose her with the fury of 1000elevators."  So, yes, these patrons are a headless body made up of more bodies, and a bodiless head who controls elevators. And, yes, this head once went with that body.

"Before she was a God, she was human. Abandoned at the Cosmic Dispatch as a child, she was raised by the Cosmic Gantry. Its girders span all of space itself and allow her to reach even the furthest corners of the stars beyond the stars. The Gantry is the framework of the universe, as well as a sentient elevator network. She drank of the Network's omniscience, and paid the price. Razor-Worn is the mind of the Gantry, and the Network is her body. All who move, do so by her will. All who rise, only do when the network allows. Under the watch of the Elevator God, no one will be abandoned. All who do not bow, will have their heads removed… in her image."

There are a great many patrons available for Dungeon Crawl Classics at this time. Some of them are utilitarian. Some of them are reproductions of things encountered in Appendix N literature or popular culture. Many of them are very creative. I cannot think of anything quite so unique as this.

In the depths of space no one can hear you scream... unless you're trapped in an elevator hurtling through time and space. Propelled by the cabling of the Cosmic Gantry, and at the behest of the Elevator God herself... Razor-Worn, Henceforth The Shaft!