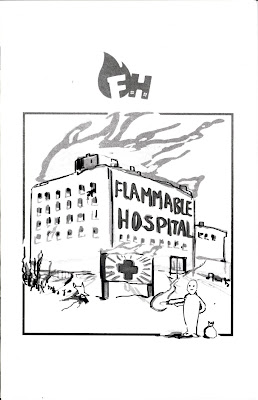 Disclosure: James Pozenel Jr. sent me a copy of this zine so that I could create this listing. While he is not credited with this product, he has done other writing which appears, or will appear, in the DCC Trove of Treasures. I am told that the copy he sent me was an extra. Was it though? Or was he just trying to exorcise his games collection?

This listing is honorary because Flammable Hospital is more of a "DCC-adjacent" product than something directly tied into Dungeon Crawl Classics. For one thing, your level is random, and you might be "Star Jackson" level. Abilities are taken from a combination of D&D and DCC (although "Sexy/Charmisma" is a bit different), but they are percentiles, apparently generated by rolling 10d10 x 10. Or perhaps not. There are no clear rules. There is no clear indication of how to use the material provided. This is not an accident.

Flammable Hospital does not take itself seriously. At best, it is a way to roll dice and role-play without much of an actual "game" involved, which may be perfect if you want to get the silliness out of the way at the beginning of a convention or if you don't feel like anything more serious one night.

Usually, I try to figure out some way to use an unusual product within a regular Dungeon Crawl Classics campaign. Here, I could see some of the background as a setting for a Country Crawl Classics or even an Umerica adventure where the Flammable Hospital is inhabited by the kind of insane beings who created it. Just be aware that you will have to build it yourself; you will only be getting the skeleton of a skeleton here!

You can find another review on Flammable Hospital here.

I am not sure where you can find a copy of this. My best advice is to start cataloguing every DCC and MCC product in existence, and perhaps someone will take pity upon you. It worked for me!