Tomb of the Savage Kings 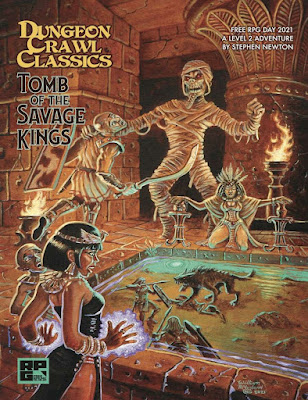 Tomb of the Savage Kings is a 2nd level adventure by Stephen Newton. Art is by Will McAusland (including cover), Stefan Poag (including cartography), Chris Arneson, Jason Edwards, Brad McDevitt, and Jesse Mohn. The publisher is Goodman Games.

This product was the Goodman Games DCC offering for Free RPG Day 2021. It makes use of Portnelle, the town from the author's The Corpse That Love Built, and has ties to Harley Stroh's Doom of the Savage Kings. At its heart, though, the adventure is pure Hammer Horror mummy films, and acknowledges is!

Thanks to pandemic restrictions in Toronto, I was unable to attend Free RPG Day at my FLGS - or any FLGS. I was in the United States over American Thanksgiving weekend, and stopped by Noble Knight Games after emailing to ensure they still had the adventure in stock. Alas, they were mistaken, and I went away...well, not empty-handed, but without this adventure!

Goodman Games offered it free, but the customer still pays shipping, which is costly to Canada at this time. I've had it sent to family in Wisconsin, where I hope to pick it up after Gary Con. As a result, I have not yet had a chance to run this, although I do have the pdf, and have given it a brief read-through. All of which is to say that I am not really qualified to speak about it at this time. I did find this thread interesting on the Goodman Games Forums. Especially reading the author's comments, it feels as though I am doing a major injustice in not having sat down with the adventure to give it a thorough reading. Honestly, I prefer to read physical copies.

Portnelle’s most popular and wealthy socialite, the widow Zita Aztur, has approached the PCs in a desperate plea for assistance. Zita’s sister Isobel has gone missing! Isobel had recently become smitten with a mysterious suitor who fancies himself an adventurer. Zita fears the stranger may have enticed Isobel to seek out the Moon Spear of Andoheb. Most who have searched for the spear have never been seen again, but those foolhardy souls never had your skill or confidence—and the widow is paying handsomely…