Doom of the Savage Kings 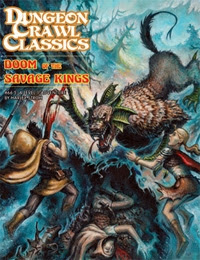 DCC #66.5: Doom of the Savage Kings is a level 1 adventure written by Harley Stroh. The cover is by Doug Kovacs. Interior illustrations are by Doug Kovacs and Stefan Poag. This adventure was published by Goodman Games.

I have discussed this adventure in some detail on Raven Crowking's Nest, and I don't have a lot to add to it.

Doom of the Savage Kings was initially available, in print, as a special addition/incentive for those who pre-ordered the Dungeon Crawl Classics core rulebook first printing.  I was one of those.

This is actually the third Dungeon Crawl Classics adventure that I ran, having previously run Portal Under the Stars as a trial adventure, and Sailors on the Starless Sea as a 0-level funnel. The PCs from Sailors went on to face the Hound of Hirot in Doom. From here they went on to a DCCified version of James Raggi's Death Frost Doom.

In many ways, this adventure exemplifies what makes Dungeon Crawl Classics great. It gives good examples of "death throes" (both in the Serpent Mound and with the Hound itself), it has an excellent witch, it deals with human conflict as well as supernatural conflict, and it pits 1st level PCs against a demon. Better, it demonstrates both the dangers of magic items, and the "Quest For It" nature by which a standard item may become enchanted.

This adventure, however, is not incredibly "gonzo". It takes place within the area of a believable village, with believable characters within it. The secondary sites, like the Serpent Mound and the lair of the Hound, are equally believable within the context of the setting. This adventure is very firmly grounded. As much as we may enjoy journeys to other worlds and mixing our science fantasy with our fantasy fantasy, it is nice to have some really solid products that demonstrate that Dungeon Crawl Classics is great without requiring mind-bending alterations to the expected game setting.

Get It Here!
Posted by ravencrowking at 11:16