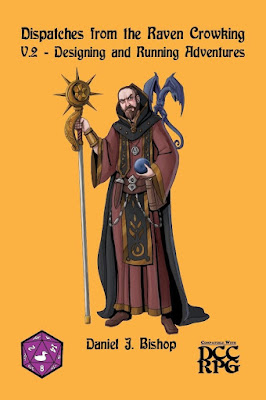 Dispatches from the Raven Crowking V.2: Designing and Running Adventures was written by Daniel J. Bishop. Art was provided by Tamas Baranya, Brett Neufeld, and Gary Dupuis. This was published by Purple Duck Games.

Disclosure: I am the author. Brett Neufeld was provided with a couple of photographs to work from, and produced a fantasy illustration of me for the cover. He kindly gave me less grey, more hair, and less belly, but it is otherwise a damn fine reproduction of your humble (?) author's appearance. The dragon is optional.

While Volume 1 focused on effecting judging, Volume 2 focuses on designing adventures that work. Anyone who has read more than one of these volumes will note that the gaming philosophy of one bleeds into the other. Although each volume may be read separately, you will get more out of them if you read them all. But, then, I would say that.

Introduction: You have read introductions before. Apart from some nice (and deserved!) words about the Dungeon Crawl Classics community, there is nothing new here.

Basic Adventure Design: Some basic notes on designing adventures, including some insights into actual products that I have worked on.

Using the Table to Your Advantage: When designing an adventure for a role-playing game, it is sometimes useful to consider not only what is happening in the fictive milieu, but also what is happening at the table.

Killing Fields: If you consider games in which encounters tend to be "balanced" against party level, you will quickly realize that character growth has no objective measure against the fictive milieu. A "killing field" is an area that less powerful characters simply cannot survive, which exists even when characters are less powerful.

How Much is Too Much?: Short answer: Don't worry about it. Longer answer: How to make it your players' problem, not yours.

Working For a Living: Why your PCs can't simply make stuff instead of going into dark and dangerous spaces for fun and profit. Well, they can, but it is not as easy as the players think.

Your Dungeon Crawl Classics Monster Manual: Monsters should be unique, but creatures in the world are not always so. In the Dungeon Crawl Classics game, Appendix L suggests strongly that certain creatures probably exist in most DCC worlds....their languages do. Likewise, the descriptions of certain creatures imply as assumption of qualities both known and unknown. This article includes The Following Thing, a nasty encounter that you can use against your PCs.